Johnson hopes to use her education to become a college professor. 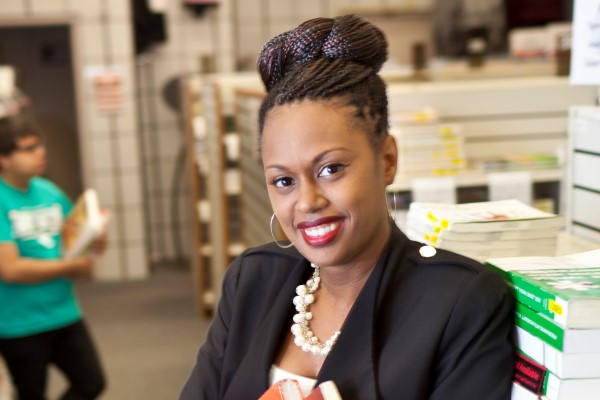 Tara Johnson ’12 SB has had a long and rewarding career behind the scenes in retail, working for Nordstrom, Ralph Lauren, and Chaffey College, where she is an assistant textbook buyer.

Now, it’s time for her to start gearing up for the next chapter in her life.

“I have always wanted to be a college professor,” the San Diego State University graduate said. “My job has all of the things I love about buying, plus I am able to interact with students, and now I really want to become an adjunct.”

To get there, Johnson decided to enroll in the School of Business Masters of Arts in Management (MAM) program, taking classes at the Rancho Cucamonga campus near her home in Fontana.

“I had a really great experience at Redlands,” she said. “There were five of us in our cohort, and we called ourselves a ‘MAMily.’ We really did develop a bond going through the program.”

With a full time job, husband and three children under the age of eight, it was hard – but worth it.

“It changed the direction of my life,” Johnson said. “With the masters, I can do everything times four because I have the degree now.”

That’s the lesson she plans to share with the young women she mentors through the Delta Academy, a program run by her sorority Delta Sigma Theta.

“My job is to support the girls, but I get as much back,” she said.

Support for Johnson’s education came through the Kathie J. Rawding Endowed Scholarship, which she received after being nominated by an instructor. Bruce Rawding, associate program director for the School of Business, decided to create the scholarship as a way to deal with his grief over the loss of his wife in 2007.

“I was looking for constructive ways to honor her memory,” he said. “Kathie worked for the University for 12 years, and we both earned our MBAs here. I wanted to give back in her name.”

As Rawding developed the scholarship’s guidelines, he made an effort to ensure that certain students weren’t overlooked.

“I wanted to give to other Kathie’s out there – women of color who were looking for some recognition and financial support, who didn’t come from a wealthy background or companies offering aid,” he said. “Not to my surprise, there are a lot of Kathie’s out there – hard working, intelligent people who want to get ahead and are doing good work. They deserved to be recognized and acknowledged.”

Johnson was touched when she received the award in 2012, and said her sense of gratitude became even greater after she met Rawding.

“With the masters, I can do everything times four because I have the degree now.”