Pete Aguilar ’01 smiled while describing his orientation as a freshman member of Congress. “It’s like drinking out of a fire hose,” said the now-former mayor of Redlands sworn in to Congress on Jan. 6, 2015.

With wife, Alisha ’02, and young sons, Palmer and Evan, looking on, Aguilar took the oath to represent the 31st Congressional District for California in the U.S. House of Representatives as the second Bulldog in Congress. The first was Juanita Millender-McDonald ’60, who served from 1996 to 2007.

Fellow Bulldogs—his advisors and peers at Redlands—helped Aguilar shape the interest in public service he developed while working alongside his grandfather at the San Bernardino County Courthouse as a young boy into goals for work in public service. He earned two bachelor of science degrees—in government and business administration—and became deeply involved in serving the community.

“Pete was one of the only freshmen who ever looked me up on the first day of classes,” said Tony Mueller ’90, director of Community Service Learning, “to say he wanted to serve children.” 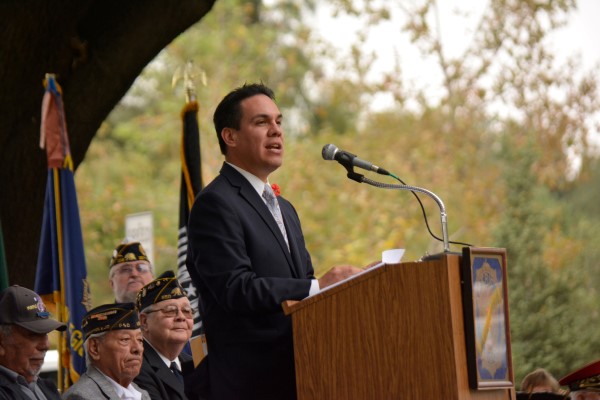 Vice President for Enrollment Kevin Dyerly ’00, ’04 roomed with Aguilar in college and remembers his friend “getting up at the crack of dawn on Saturdays to coordinate a student project for Habitat for Humanity.

“He has always cared deeply for his community and the quality of life for people within it.” Aguilar’s first time in Washington, D.C., was as a Tinker Scholar, working as a research intern for policy consultant Janet Shikles ’64. He found the experience “very appealing.”

“The pace was energizing and the opportunities for young people promising,” he said.

Stints as regional deputy director for then-California Gov. Gray Davis and in the private sector as director of governmental relations for San Bernardino-based Arrowhead Credit Union followed. In 2006, Aguilar was appointed to his first seat in office as the youngest member in the city’s history on the Redlands City Council. He was re-elected twice and chosen as the city’s mayor by his council colleagues in 2010.

Aguilar declared early for the 2014 congressional election. He had lost a 2012 bid for Congress in the open primary and called the 2014 run a “more personal, family decision.”

The 19-month campaign was challenging in both pace and geography, he said, as the 31st District is a lot of ground to cover. “In a very public way, I went through an interview for my dream job,” he said. “This is where I want to be and where I think I can offer the most.”

“Pete was one of the only freshmen who ever looked me up on the first day of classes.”