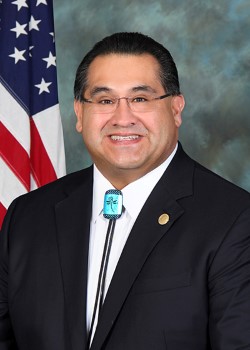 The first Native American appointed to the California State Board of Education, James C. Ramos ’09 pursues a career in service to his community

On the surface, little in his early life would have predicted this trajectory. Ramos grew up in a mobile home at the entrance of his reservation at a time when the area was one of the most poverty-stricken in the country.

Yet his grandmother passed on important lessons. “At one point, we had horse stables [on the reservation],” Ramos says. “Grandmother Martha Manuel Chacon sold soda pop and snacks to people who came to ride. I saw how she made a profit, and I became interested in business.”

When Ramos was growing up, the tribal government survived on a budget of less than $300 per year. The tribe, however, continued to try various paths to economic success, and, in 1986, opened San Manuel Indian Bingo, which grew to include a casino. With gaming came jobs—Ramos and his peers worked in maintenance or as food runners—and the economic development created enough income so the tribal government could pave the roads and provide an emergency budget to fix gas and electricity line breaks (which had previously languished for months without repair).

While appreciative of these changes, Ramos believed there was still room for improvement, as an outside trustee controlled the tribe’s finances. With the idea of helping to bring tribal funds under tribal control, Ramos enrolled in business programs, first at Victor Valley College for an associate’s degree, then at California State University, San Bernardino, where he earned a bachelor’s with a concentration in accounting.

Ramos later pursued an MBA at the University of Redlands, where he is currently a trustee. “Attending the University of Redlands was a dream of my own, but also of my parents,” says Ramos, who recalls sitting in the back seat of the car with his family driving by the “R” on the hill. “As I tell young people, once you have a degree from a renowned institution like U of R, no one can take that away from you.”

In 1996, Ramos was elected to the tribal council government and stayed active, later serving as chairman. As a member of the tribal council, Ramos not only managed finances, but also purchased property important to the tribe, reenergized its culture, and ran for county supervisor.

In 2005, Ramos—by then a successful restauranteur—won election to the Community College Board of Trustees; he was reelected in 2010. In 2008, Gov. Arnold Schwarzenegger appointed Ramos to the California State Native American Heritage Commission, where he currently serves as chair.

Throughout his public service, Ramos’ priorities have included educating Californians about its First People, as well as encouraging young people to pursue their dreams, including higher education.

Ramos is keenly aware he can be a role model for others. “I am proud of being the first to venture into public service outside of tribal government,” he says. “I hope to open those doors to younger members in the community, whether Native American or not.”

He knows even one example can make a difference. “When I was running for my first elected post, my nephew decided to run for class president—and won,” Ramos says. “He had the attitude, ‘If he can do it, I can do it!’”

"Once you have a degree from a renowned institution like U of R, no one can take that away from you.”