She gets the facts right at USC Annenberg

Noelle Medina ’15 transferred to the University of Redlands after spending two years studying journalism at the University of Missouri. Determined to sharpen her storytelling skills, Medina decided to obtain a creative writing degree.

“Initially, I was afraid a degree in creative writing wouldn't land me a job at a news station, but I was wrong,” Medina says. “With no on-camera experience, I was hired, and I give full credit to the Creative Writing Department at Redlands.” 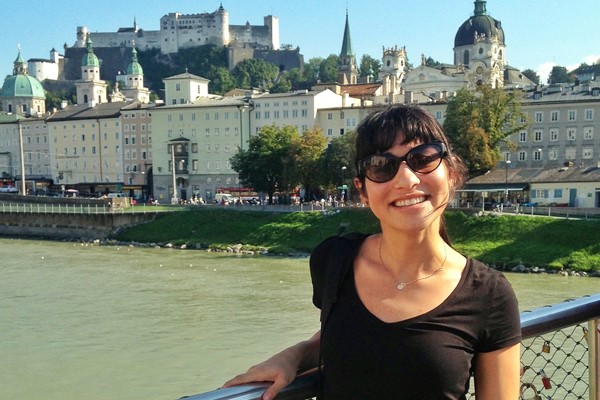 After graduation, Medina was hired as the weekday reporter, weekend producer, and backup anchor at KRCR News Channel 7 in northern California. On weekdays, she found, shot, edited and wrote stories to create segments for evening broadcasts.

“I’m usually on-air twice a day, which means I’m in the studio reading the teleprompter live,” she says.

On weekends, however, Medina could be found behind the camera.

“As a weekend producer, I got to call the shots,” she says. “I ‘stacked’ the shows, which means I curated the content so that it airs in a sequence that makes sense to the viewers. While I was behind the camera, I got to make adjustments to the show as it airs.”

She not only credits her writing classes, which helped her find her voice as a writer, but also her involvement in several on-campus organizations with having prepared her for her that position.

“Maroon and Grey Student Ambassadors taught me the importance and power of networking, which is a big part of being a reporter. I'm much better at making connections now because of Maroon and Grey's lessons on how to be social and professional at the same time,” says Medina. “Senior year, I co-hosted a KDAWG Radio show and interviewed TV host Mario Lopez and journalist and presidential speechwriter James Fallows. Getting to interview such notable people as a college student opened some amazing doors.”

Medina applied her journalism skills during a semester studying abroad in Austria through the Salzburg Program at Redlands. For one of her classes, she kept a journal that documented her experiences—good and bad—while traveling through Europe. That journal now rests on her nightstand.

“I read a passage from it almost every night before bed because it makes me reflect on some of the scariest, craziest and best times of my life,” she says.

Currently, Medina is a graduate student at the University of Southern California Annenberg School for Communication and Journalism. Recalling her Redlands years, Medina acknowledges the contributions of her academic and social experiences. Her success beyond campus, she says, resulted from both her Redlands education and the positive influence of the “acquaintances, friends, faculty and staff I met during my years as a Bulldog.”

“Senior year, I co-hosted a KDAWG Radio show and interviewed TV host Mario Lopez and journalist and presidential speechwriter James Fallows. Getting to interview such notable people as a college student opened some amazing doors.”