During his more than 30-year career in the telecommunications industry, Cary Attl ‘14 worked hard, earned the respect of his peers, and received stellar performance reviews. He seemed well-positioned for a promotion, but something was missing—an academic degree. When he was ultimately passed over for advancement, Attl was disappointed, but not surprised.

“I had long been self-conscious about not completing my college education,” he said. “At that moment, I recognized that my company had changed, but I hadn’t changed with it.”

Attl researched colleges seeking an opportunity to learn, in a classroom, among a group of students and from faculty who were diverse in their backgrounds, cultures, and professional experience. He found what he was looking for, and more, at the University of Redlands, San Diego. 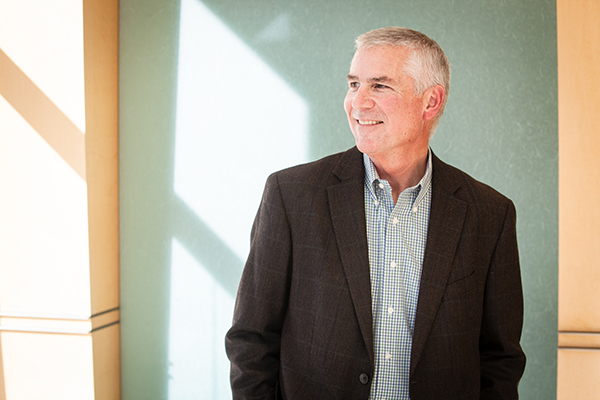 Fast forward to Sept. 25, 2017 to find Attl not only a proud graduate himself, but also the proud father of both an MBA alumnus and an MBA candidate with the U of R, an active member of the San Diego regional chapter and the University’s alumni board—and a special guest at the grand opening ceremony celebrating the new San Diego regional campus.

On the ninth-floor campus, where an endless view was an unwitting symbol of the endless possibilities of education, a large crowd made up of U of R faculty and administrators, local leaders, and a spirited group of alumni and students gathered to celebrate, and it seemed only right that Attl would pick up the traditional big scissors to cut the ceremonial grand opening ribbon, cheered on by applause and many shouting the University’s signature greeting “Och Tamale,” and a bark or two from the University’s live bulldog mascot-in-training, Adelaide, who lent her cuteness to the party.

U of R President Ralph Kuncl kept the enthusiasm going when he addressed the crowd and talked of Attl’s transformative experience at U of R. He said the education is a “game-changer” for students like Attl and so many others who “represent the growing cross-section of our nation that will shape and define our future.”

You might be wondering if Attl received his promotion after graduation. The answer might surprise some, but he found himself no longer desiring a new role.

“It turns out I actually really enjoy what I am doing in the position I have,” he said. “The difference is now I think more globally and critically. I approach and solve problems more creatively, and communicate more directly and effectively. This has led to increased effectiveness and capacity to take on additional responsibilities and projects—that, in itself, is rewarding.”

“The difference is now I think more globally and critically. I approach and solve problems more creatively, and communicate more directly and effectively."