She was inducted into the Women Divers Hall of Fame for her years-long campaign connecting scuba diving and its benefits for people with disabilities.

Deep beneath the ocean’s surface, Cody Unser ’09 has a sense of utter independence. “Scuba diving is an experience I have not found on land,” she says. “It’s pure freedom from the gravity I feel in my wheelchair every day.”

When she was 12, Unser was paralyzed by transverse myelitis, an autoimmune condition causing inflammation of the spinal cord. One year later, she and her mother, Shelley Unser, founded the Cody Unser First Step Foundation.

For nearly two decades they’ve advocated for greater awareness and study of the disease. Unser also founded Operation Deep Down, a project in conjunction with Johns Hopkins researchers, to understand how scuba diving may help people with disabilities, with a special emphasis on veterans and youth, including paraplegics like herself. 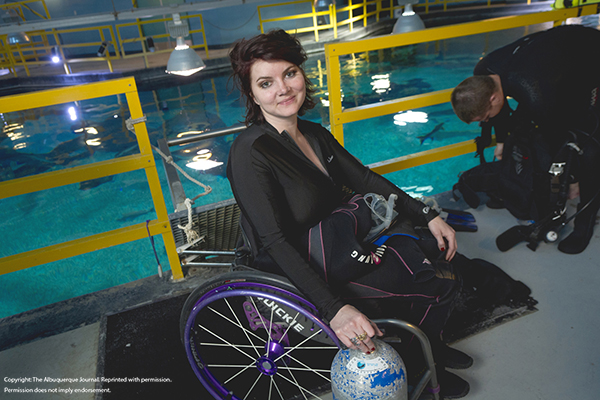 “After diving, I had increased sensation in my legs and bladder that would last about three weeks. I knew there was something about scuba diving that must be studied,” she says, and with a lot of determination, she got researchers to pay attention. “The scuba study has demanded the attention of the dive industry and influenced health-policy discussions. The results of the study were remarkable, with 80 percent to 100 percent reduction in PTSD symptoms and an overall improvement in sensation, better sleep and improvement in function.”

In April, 2016 Unser was inducted into the Women Divers Hall of Fame for her advocacy work—the first woman with a disability to be inducted. “Since I became paralyzed and started my foundation, my vision has always been integration, inclusion and awareness of what we are capable of doing no matter what disability we may have,” she says. “The diving industry has really embraced the disability community.” 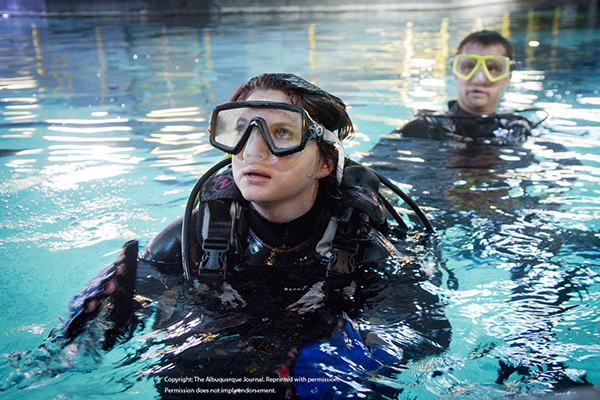 At Redlands, Unser earned her degree—biopolitics: the interconnection between biology and political action in human health—from the Johnston Center, and she will soon graduate with a master’s in public health from George Washington University.

“Disability is a public health issue, even though most people don’t refer to it as such,” she says. “Anyone can become disabled at any time, and everyone is deteriorating as we age, so it’s very important that we continue building an environment where disability rights, research and quality of life are brought to the forefront of political action.”

“After diving, I had increased sensation in my legs and bladder that would last about three weeks. I knew there was something about scuba diving that must be studied.”