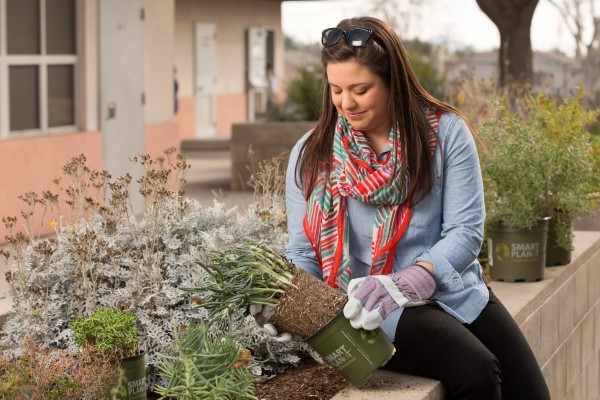 "People don’t understand how much to water,” says Katie Heer ’10. “Even when we’re not in a drought people overwater their lawns.”

And Heer knows what she’s talking about.

As the natural resources manager with the Inland Empire Resource Conservation District (IERCD), and with a B.S. in environmental science from Redlands, she spends many of her working hours educating people about how to conserve water.

Heer became fascinated with environmental science at Redlands after taking a freshman introductory class with Environmental Studies Professor Wendy McIntyre. Her interest deepened over the next three years, and for her capstone project she took part in a comprehensive survey of campus trees.

“This position is a perfect fit for me,” she says, “since I realized while I was still in school that I was interested in the environment but more in the management side rather than being out in the field all day surveying species. I’m interested in seeing the big picture.”

The mission of IERCD, which is a public agency based in Redlands, is to carry out environmental protection, restoration and education in a service area that incorporates much of southwestern San Bernardino County and a portion of Riverside County.

“We get to really hone in on one area,” says Heer.

To encourage better stewardship of the watershed, Heer makes frequent presentations to community groups on water conservation. For a recent workshop, she co-presented with Molly Bogh, the author of Life After Lawns: 8 Steps from Grass to a Waterwise Garden, who is a Highlands resident. She also came up with a program to create small, drought-tolerant gardens on school campuses. After explaining the project to the students, she rolls up her sleeves and helps them plant the garden.

Currently, Heer is working on a program to train lawn-care professionals on water conservation, “since many people just pay a landscaper to come.”

Having gone to high school in Arizona —“where everyone has rocks and cacti in their yard”—Heer is dismayed at how attached people in Southern California are to their lawns. “We’re trying to explain that you can still have a lush, colorful yard but that doesn’t need to be grass.” 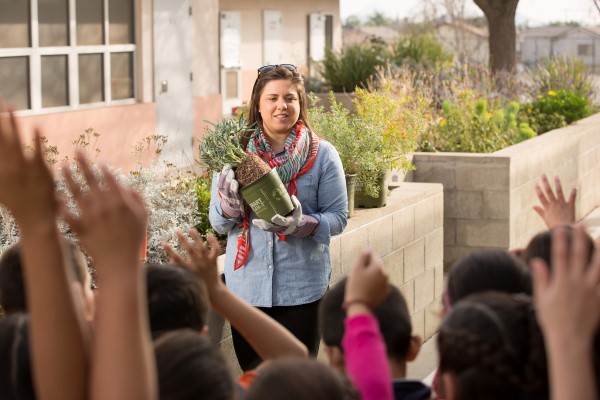 Heer also works with developers required to restore an area of habitat as mitigation for damage caused by a development project. Sometimes the restoration will be built into the plan and the restoration area located within a gated area in the community. Other times, it could be offsite, and Heer is currently overseeing several restoration projects in nearby San Timoteo Canyon, where areas overtaken with invasive species or degraded by years of agriculture are being restored.

“We figure out what plants should be there, plant them and irrigate them, and then move into the maintaining stage,” she says.

Lately Heer and the IERCD have been working closely with Environmental Studies Professor Tim Krantz in Big Bear on the vulnerable flora in the pebble plains.

“It’s a very unique habitat with these tiny plants,” she says. “When they’re completely in bloom it’s beautiful. There are numerous species of these little plants. In fact, it’s as biodiverse as a coral reef. It’s just a very unique habitat, and you can’t find it anywhere other than the San Bernardino Mountains.”

Heer and her colleagues are carrying out conservation where the plains have been degraded by dirt bikes and other off road activities. “People don’t realize it’s such a special place, and you really wouldn’t unless you’d seen it in the spring. We’re working to protect it, because areas like this don’t exist in many places around the world."

"I realized while I was still in school that I was interested in the environment but more in the management side rather than being out in the field all day surveying species. I’m interested in seeing the big picture."