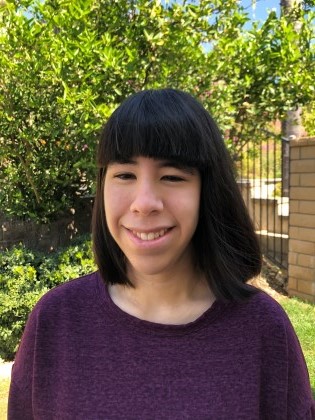 Amanda San Miguel is a Studio Art major with an emphasis in Painting/Drawing and a Music-Instrumental minor. They were raised in Rancho Cucamonga and graduated from Los Osos High Schools in 2018. They began their tenure at the University of Redlands in 2018 and is set to graduate in late April 2022.

Amanda has shown fascination for the arts from a young age. They have played French horn for 9 years and counting, and started drawing when they were very young and took local art classes because they liked to draw and paint so much. Recently, they have taken an interest in doing fanart that originates from pop culture and posting their work online. Less than a year ago, Amanda had decided to create work that was deemed controversial and/or political, as they had never done that kind of work before, and they wanted to create awareness about the world around us.

Amanda hopes to continue their drawing/painting endeavors (and perhaps sell their work or take commissions) and they hope to continue to play the French horn after their graduation from the University. As they often state when music and art involved: "(I) can't have one without the other."

I have done a lot more drawings than paintings in recent years, so I decided to change that by having my senior project consist of paintings. I want my paintings to get people to think about how the history or meaning of the painting(s) could reflect on the real world or how they could be the subject of new activity, and how we can make the world a better place by recognizing history and current issues and work to make society a better place to live in with equality, fairness, and respectability for all.

I had made it my mission to create art that would be controversial or political as I  have never done that type of artwork before. Through venting my anger and frustration, thoughts of current actions that could have consequences in the future, good or bad, and history feared forgotten, I had made work reflecting the state of the U.S. and the world, and invoking pieces of history into my artwork and I really want people to reflect not just on the good and the bad, but also think about what other changes can be made to ensure that people are treated equally on all spectrums, whether you're LGBT, a minority or a person of color, disabled, etc.