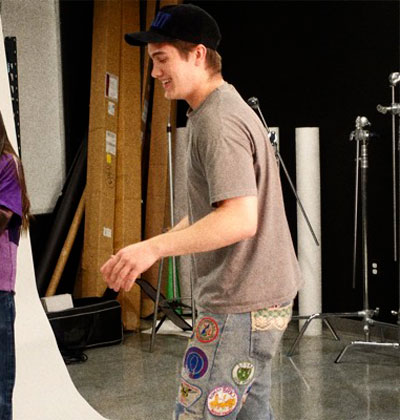 I am from Keyes, a small town in central California. During my early childhood I moved from Keyes to Ceres, a much larger, but still small town. Then later back to Keyes, where I would live for my teenage years, prior to graduating high school.

Within my work I search to provoke themes of familiarity through the presence of easily distinguishable imagery reflective of personal, material influences, and subliminal memories experienced within our shared and individual living experiences. Integrating these aspects along with consideration of traditional design principles leads to finished products that are both a sum of their influences and original creations.

In my design practice I tend to flow between mediums. Using analog materials to create elements, then bringing those into a digital workspace, and vice versa. Allowing my practices to follow these tendencies feels natural, and reminiscent of juvenile thought process surrounding creation. In thinking about this idea, I came to the conclusion that this mindset is reflective of an ongoing sense of curiosity and amazement of both natural and human creation. From this state stems a passion to learn and progress, through creating, hopefully for the rest of my life.

Within this project Andruw worked across digital and analog mediums to develop two garment patterns along with the promotional and merchandising rollout to accompany the clothes. The designs integrate a variety of details pulled from personal archives of vintage clothing; each garment is assembled from curated secondhand sportwear spanning across multiple decades. The newly designed pieces intend to recontextualize items, separating them from their original, graphically implied connotations, and allowing for them to exist under the same function while devoid of the previous affiliations.

Andruw was born in central California and grew up in the cities of Keyes and Ceres. Otherworldly subjects such as space travel, dinosaurs and robots stoked an artistic interest for him early in elementary school, and sheets of notebook paper would soon fill up with imaginative interpretations of each. Partway through elementary, Andruw would switch schools. At the new campus, mandatory visual and performing arts classes were enjoyed by students weekly. This served to further both his artistic interests and skillset, and was an opportunity which he remains grateful to have experienced.

Upon entering and pass through junior high school, art remained an interest of Andruw's, but a lack of artistic community and discourse surrounding the field as a career path created uncertain feelings toward further pursuing education within the subject. In Fall of 2018, he began his college education at the University of Redlands. After enrolling in a mix of prerequisite and business major foundational courses, Andruw realized that business classes suck. He also realized that the time spent creating in Ann Peppers' studios brought great joy to him, no matter the stress of long nights, uncooperative equipment, or sneaky deadlines.

A decision was made to major in Studio Art with a concentration in Graphic Design. Along way minors in Art History and Media and Visual Culture Studies were also achieved. With the education Andruw has received at Redlands, he hopes to be able to work as a designer of any capacity. During his time in college Andruw completed works for Bay Area-based record and clothing store, Mad Monk, and Toronto-based fashion label, Undone Design. He is currently working as an intern for Nichola Raefski, a fashion company currently headquartered in New York, and recent presenter at NYFW. He's unsure what the future, both short and long term, will entail, but will figure it out.