Pain and Touch Sensitivity in the C58/J Mouse Strain Abstract 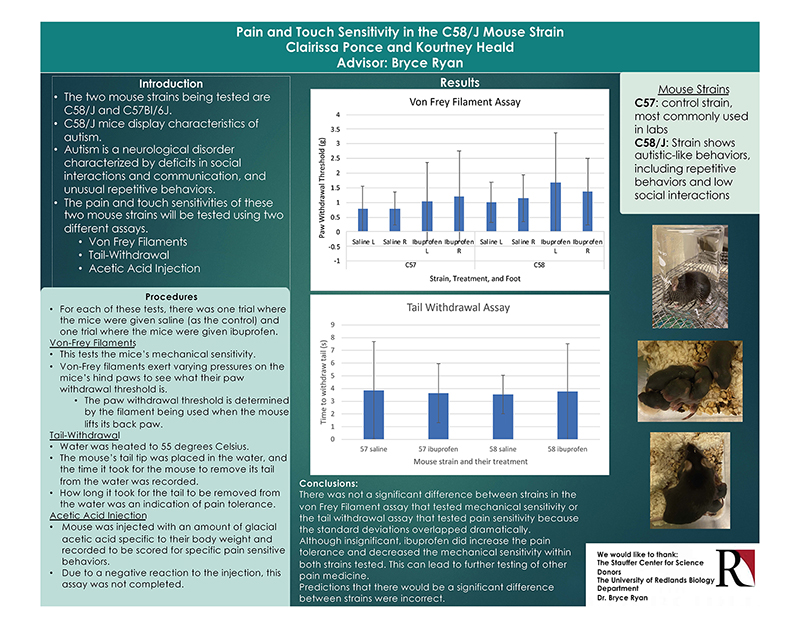 Autism is a neurological disorder characterized by unusual repetitive behaviors and deficits in social interactions and communication. C58/J mice display the typical characteristics of human autism. This strain of mouse is often used to study the effect of autism on social behaviors compared to C57/J mice, which have more standard neurological health. The purpose of this experiment was to investigate the pain and touch sensitivity of these two mouse strains. This was done by conducting three different assays including von frey filaments, tail withdrawal, and acetic acid injection. These assays were ran after injecting the mice with either saline or ibuprofen. If the assays were effective, we would expect there to be a difference in sensitivity between the ibuprofen and saline groups. We would also suspect there to be some difference between mouse strains due to their different degrees of sensitivity to environmental simulation. Unfortunately, our results for this experiment were insignificant. The acetic acid injection testing was not able to be completed due to difficulties, and the hot water and von frey filament testing showed no significant difference between saline and ibuprofen groups or between the two different strains.