Coming from a family of Burmese refugees, San never takes his education for granted. 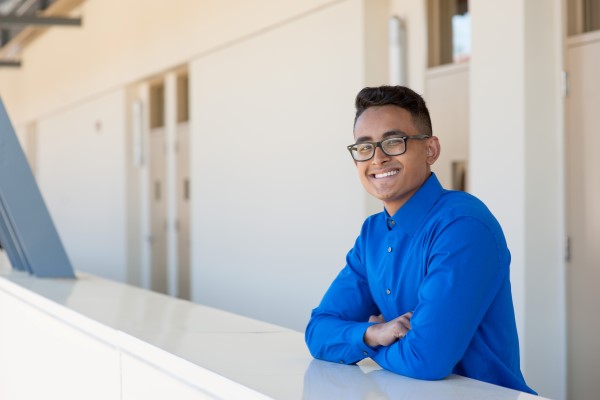 San Tun ’19 never takes being at the University of Redlands for granted. Born in Burma, Tun began his long journey here when his mother, a freedom fighter, resolved to find a way out of the strife-riven nation so that her children could one day attend college in the United States. After his mother secured military refugee visas and settled the family in Portland, Oregon, Tun and his siblings were one step closer to that dream.

“I will never forget the look on my mother’s face when my acceptance letter from the University of Redlands came in the mail,” says Tun. “My mother is one of the bravest, toughest, and most amazing individuals that I know of to this day, and I am well aware of how much she has had to sacrifice, and is still sacrificing, just in order to get me to where I am today.”

With an academic focus on biology and chemistry at Redlands, Tun plans to go to medical school. “I personally can say that this University is already starting to shape me into an individual who is ready to make a real impact on society, as well as the field of medicine.”

Tun was interested in the sciences from a young age, but nothing drew his attention quite like his first biology class at Redlands with Professor Jim Blauth. “I truly believe that the University’s rigorous biology and pre-health program will prepare me for the MCAT and for graduate school,” he says.

Tun also wants to take advantage of the full spectrum of liberal arts education that Redlands offers. Psychology, religion and creative writing all appeal to him. “I know that I want to focus on science, but at the same time I want to be a well rounded citizen. In the end it’s not good to base your life off just one field of knowledge.”

Hailing from the Pacific Northwest, San enjoys nature and the outdoors, and here at Redlands he has found ample opportunity to explore the surrounding area, including trips to Big Bear Lake, Joshua Tree and the Indian Canyons. In fact, says Tun, he has found everything he was looking for in a university. “I am looking forward to spending the next three and a half years of my life as a student here at the University of Redlands, and I’m proud to call myself a Bulldog.”

Although grants and merit based scholarships covered a significant portion of the cost of Tun’s attending the University of Redlands, the balance required him and his mother to take out several student loans. The Redlands Fund scholarship he was awarded for next year lifts a significant burden off his family’s shoulders and inspires his younger siblings to pursue their own dreams.

"I will never forget the look on my mother’s face when my acceptance letter from the University of Redlands came in the mail."—San Tun