When Giselle Martinez ’20 visited the University of Redlands campus for the first time, she knew it was a place where she could grow.

A Hunsaker Scholar from Santa Cruz, California, Martinez says that the first thing she noticed about the University of Redlands campus was the sense of community. “The student who hosted me during the visiting weekend introduced me to her friends and showed me what life was like as a student; I instantly saw myself as a part of the community,” she says.

Martinez felt welcomed by professors as well “University of Redlands professors are committed to helping their students,” she says. “My professors have invested in my learning by helping me with scholarship essays and teaching me with their personal experiences—preparing me for the world.”

It was Global Business Professor Jack Osborn who encouraged Martinez to become a global business major instead of focusing in a science, technology, engineering, and math (STEM) area. After taking a few business courses, she received the Finance Award and a grant from the Jordan A. Korinke Memorial Endowment for Experiential Learning, giving her the opportunity to spend nine intensive weeks studying finance at the London School of Economics—a highlight of Martinez’s educational experience. 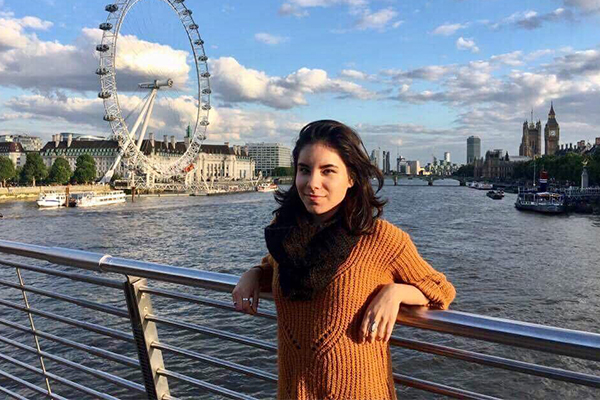 “Studying in London challenged me to adapt to a new environment—not only to the cultural and academic differences between America and the UK, but also to lectures of 300 students, which was very different than the University of Redlands,” she says. “I was able to meet so many different people.”

Her time across the pond motivated Martinez to seize another study abroad opportunity—this time in China and Japan for a year. “I’m hoping that experience will help me decide if I want to work domestically or abroad after I graduate,” she says.

Martinez will be prepared either way, thanks to the Global Business language requirement—a stipulation declaring that all students in the major must be proficient in a language relevant to their concentration. “It has been really fun to work on my language acquisition—I’m currently studying Mandarin,” she says. “When I study abroad next year, I’ll also be learning Japanese.”

“Sometimes it’s hard to see your own potential. The people I have met at the University of Redlands helped me realize my own.”