Growing up as a competitive gymnast, Jacob Miner ’20 learned discipline early on. Little did he know that in college this discipline would come in handy as he held himself to high standards, practicing the flute for two hours a day and juggling multiple commitments.

Originally from Antioch, Calif., his involvement in youth orchestra was the connection that led to the University of Redlands. 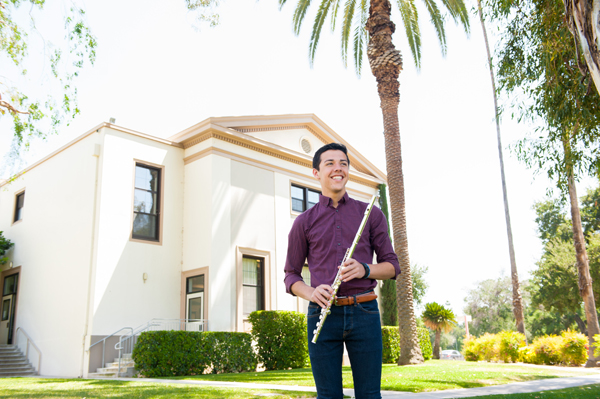 As a junior in high school, Jacob came across a video clip of U of R musician-teacher Sara Andon and wrote a comment on how great she sounded. “She took the time out of her day to private message me on Facebook instead of just liking the comment,” he said. After his conductor told him about the music program at Redlands, Jacob knew he wanted to attend.

In addition to double majoring in music education and flute performance, at the University Jacob wanted to find still more ways to get involved. He now splits his time between Phi Mu Alpha, the fine arts fraternity; the Associated Students of the University of Redlands, where he is co-director of special events; and the diving team. As if that’s not enough, he just landed an internship with the Redlands Symphony.

He notes that the broad spectrum of clubs and organizations on campus help prepare him for life after college. “Along with playing flute, I have a huge passion for event leadership,” he said. “Everything I’m a part of will have a key role in my future when I graduate.”

Jacob notes that the constant support and encouragement he receives is one of his favorite parts of the Redlands community. A highlight of his first year was competing at The Southern California Intercollegiate Athletic Conference Championships for diving. “It was the 3-meter dive and I had the meet of my life,” he said. “Going for a dive, feeling the break of the water, and then coming up and hearing my teammates cheering was the best feeling ever.”

With his range of interests, Jacob credits the “legitimately individualized” experience that Redlands offers students as a starting block for future success. “It gives me a chance to commit to what I want to commit to,” he said.  “I feel comfortable studying here because I know I’ll be able to pursue all of my passions, and not just one.”

“I feel comfortable studying here because I know I’ll be able to pursue all of my passions, and not just one.”