Wren Brady ’20 wasn’t looking for a strong sense of community when she was applying to college, but is delighted that ended up being what she found at the University of Redlands.

After growing up in Reno, Nev., Wren decided she needed a change in scenery. She looked to her cousin, who was enrolled at the University of Redlands, for guidance. After touring the Redlands campus, “I fell in love,” she says. “It’s close to the beach, the mountains, and L.A., and the weather is so great.” 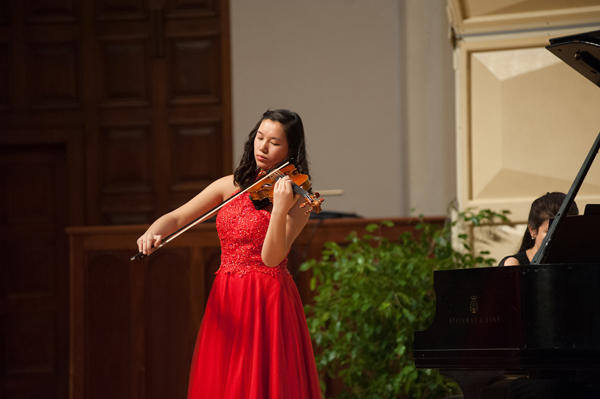 A double major in Music Performance and Music Education, Wren picked up her first violin at age 3 and never really put it down. She has been honing her skills for 16 years—first with the help of her mother, who is a violin teacher, and then with a private instructor. “I come from a very musical family,” she says. “My twin sister plays violin and viola, and my older brother plays violin and cello.”

Her years of practice showed at the President’s Honor Recital, which she performed in during her sophomore year. “I love performing, and to be selected to play was an honor,” she says. After auditioning for juries at the end of each semester, Wren advanced to finals for the recital and was selected as the only string player. “The year went by so fast, but the President’s Honor Recital was my favorite part,” she says.

A testament to her discipline, Wren infuses the same motivation into her studies as she does the violin. While practicing daily, she has managed to enroll in 19 credits’ worth of courses each semester, which is four credits more than usual. “The music faculty has been incredible,” she says, “I can’t even decide on my favorite professor; they’ve all been so great.”

But even with a packed schedule, she still manages to have fun with friends. “I live in Anderson Hall on the music floor,” she says. “Sometimes we fiddle around on the piano in the lobby or go down to the basement and jam out.”

Wren notes that she was able to make friends on campus right away due to the First Year Journey program. “I chose the trip where we went to Big Bear and the beach, and I was able to really get a feel for Southern California,” she says. “It was a fun way to meet people right at the beginning of the year.”

Even though she hasn’t nailed down exactly what she wants to do in the future, following in her mother’s footsteps is a possibility. “I love working with kids,” she says. “Being enrolled in education classes has really taught me a lot and I definitely know that I want to teach.”

“The music faculty has been incredible. I can’t even decide on my favorite professor; they’ve all been so great.”