When Terrence Perrier ’20 was looking at colleges, he couldn’t find a school that would allow him to study both music and mathematics—until he auditioned at the University of Redlands. 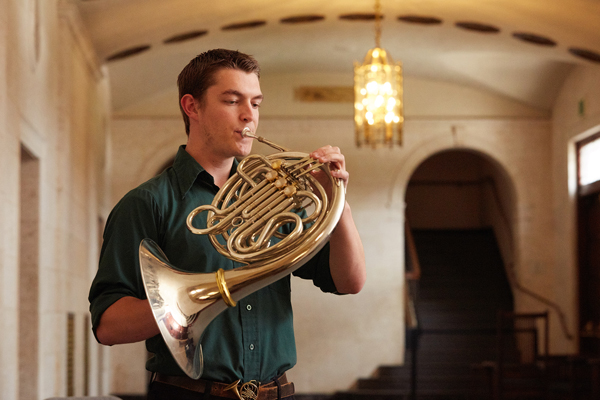 “I knew I wanted to study music, but I also had interests in other things,” he says. “I really wanted to study physics and mathematics and put them together to look at the math behind music. A lot of the other schools didn’t seem to understand that.”

On his audition day, Terrence found a likeminded faculty member in the School of Music dean, Andrew Glendening: “I was talking with the trombone professor on the audition panel and learned he was also a physicist. I brought up what I wanted to study and the first thing he said was, ‘We can make that happen.’”

Originally from Oakland, Calif., Terrence picked up the trumpet in fourth grade but was swayed by the French horn two years later. “Going into middle school, there were eight other trumpet players,” he says. “My music teacher pulled out a French horn… and I decided to make the switch. It was a more unique instrument.”

The change proved to be beneficial—Terrence is now seeking a degree in Music Performance, is a substitute for the Redlands Symphony, and was selected to play in the Young Musicians Foundation Debut Orchestra. “The YMF orchestra is made of students from colleges in the L.A. area and it’s a paid orchestra, which was a very big thing for me. It was my first time getting paid to play in an orchestra,” he says.

When it comes to his educational pursuits, Terrence appreciates the diversified opportunities and challenging curriculum that the University of Redlands offers. “The university community is a very encouraging environment,” he says. “People encourage you to pursue what you want in ways that you want. In my first-year seminar, the faculty told us they take a conservatory approach that you would find at Julliard or other music schools. Hearing that was inspiring."

Terrence looks to his horn teacher, Laura Brenes, as a source of motivation and inspiration. “I’ve talked to her about my dreams and aspirations as a musician, and she constantly references those when she’s encouraging me—she has a lot of faith in me,” he says. “She’s an active freelancer and does a lot of movie soundtracks, and that’s something I want to do.”

While some music students note that the proximity of Anderson Hall to the music building is the only thing that allows them to get to class on time, Terrence reveals that college has taught him how to manage his time. “I’ve learned there’s not always time to do everything I want,” he says. “Organizing my time has helped me do as much as I can in the most productive manner.”

After college, Terrence hopes to play in film studio orchestras recording movie soundtracks. "Being a studio horn player and recording artist," he says, "would definitely be a dream job."

“I really wanted to study physics and mathematics and put them together to look at the math behind music. A lot of the other schools didn’t seem to understand that.”