University of Redlands enabled her to explore her love of acting and prepare for a career in theatre. 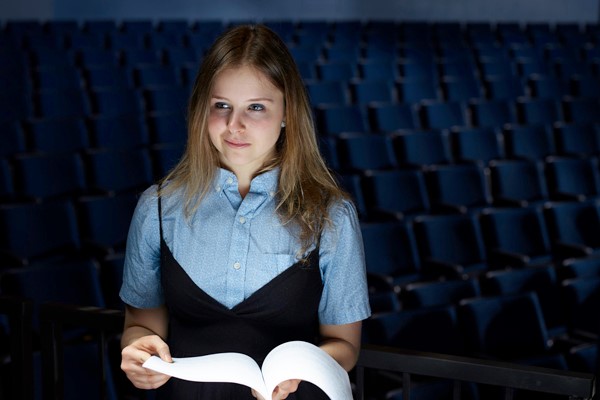 Katy Duncan ’17 triggered tears with her play, Terra: An Exploration of Love. Audience members wept when the show debuted at the Glenn Wallichs Theatre in March 2017. Long before that, though, it was the actors who got emotional, as they mined their own memories to create the play’s script.

Duncan, who directed the show as her capstone project, devised Terra using a technique called “Moment Work.” Instead of starting with a text, performers use props or other cues to improvise “moments” around a topic, which over weeks of rehearsal come to form the play.

“People are speaking things that are truth to them, and that can be very hard, but also very rewarding,” says Duncan, who estimated about half the scenes in the show were based on events from the lives of the nine cast members.

While Duncan also found the project rewarding, her true passion isn’t directing, but acting—something she discovered the summer before high school when she got a part in the chorus of a children’s theater production of Grease.

“Going out there and having lights on you and having these costumes and being in this other world, it was such an amazing, exhilarating feeling,” Duncan recalls.

Although Duncan grew up in Santa Clarita, Calif., and her parents are both University of Redlands alumni, she originally focused on East Coast schools when applying to colleges. But she was won over by the sense of community during a visit to Redlands. She also liked being able to design her own theater-based curriculum in the Johnston Center for Integrative Studies. Redlands has given her the opportunity to focus intensely on developing the skills she’ll need after graduation, when she moves to Los Angeles to pursue a career in film and television.

She already has an artistic community in LA, as a member of the Circle Squared Collective. She has had early discussions about the group, which is focused on experimental storytelling, performing some iteration of Terra.

The show consists of scenes loosely connected through the strong feelings they evoke. A daughter reminisces about the “goofy” dad who always made her laugh; a girl’s thrilling first kiss sparks an allergic reaction in her boyfriend; college students negotiate maddeningly ambiguous attractions.

“Ultimately, I wanted it to be a celebration and reflection of love,” Duncan says. “I want people to experience going through love, revisiting emotions that they’d forgotten or put away in a box. Or maybe it’s emotions that they feel every day and we are just showing.”

“Going out there and having lights on you and having these costumes and being in this other world [is] such an amazing, exhilarating feeling."