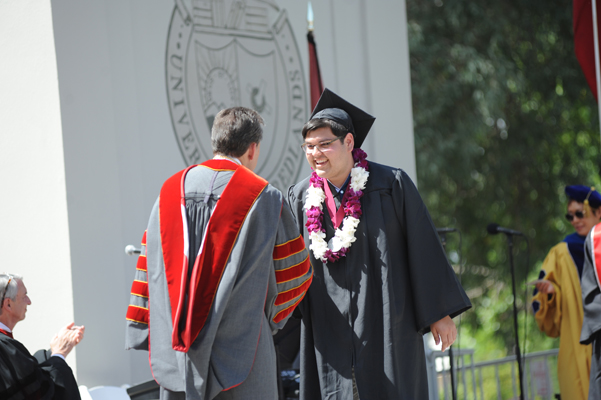 Well before Jacob Kern ’17 graduated from the University of Redlands in April 2017, he was already looking forward to moving to Seattle to start the job he landed at Amazon Web Services (AWS), a subsidiary of Amazon.com.

Even though his degree in public policy doesn’t directly relate to cloud services, his well-rounded education experience, along with his people-person disposition and future goals, make him an excellent fit for the position.

“I believe the ability to have such an interdisciplinary major was invaluable for internships and job offers,” Kern said. “I can state with unwavering certainty that I have been given the tools to propel myself further.”

When Kern enrolled at Redlands, he expected to major in business. And when he changed his major to public policy during his junior year, no one was more surprised than he was. It was a May Term travel course spent in Washington, D.C.—and a disinclination to learn a second language—that sparked his interest in public policy.

“I lived on Capitol Hill and got to experience how government works, especially how private entities work with the government,” Kern said. “So I liked the idea of going into public policy and working for a private enterprise and understanding how the government wants to do business. I could build that niche for myself.”

At AWS, Kern’s job includes working directly with clients as an associate account executive, helping new customers migrate onto Amazon services or helping existing customers expand their capabilities. He predicts he will become more specialized as he continues his work at AWS, and he hopes to focus on accounts for the military or government, particularly international government.

Kern’s interest in foreign countries and love for travel stem from many sources. While at Redlands, Kern spent a semester studying abroad in Salzburg, Austria, where he met some of his closest friends. He interned at Esri, a geographic information system software company, and worked on branding for the European and international markets. While he was there, he collaborated extensively with the company’s partner in Zürich—where a good friend of his happens to live. He and his friend, a German citizen, met up for about a week in Amsterdam during Kern’s month-long backpacking trip across eastern, central and northern Europe. Kern also spent one spring break exploring the United Kingdom.

If it sounds like Kern was a busy student, that’s because he was. While working 20 hours a week at Esri, he also worked eight hours at his on-campus job in student advancement, and kept up with his classes. He worked as a Phonathon caller and soon was promoted to manager, training other students and working on call strategies.

“I grew up in a household where it’s important to give back,” said Kern, who held yearly outreach activities as a high school student-leader and donated the funds to charity. The insider perspective of charitable giving gives him even more appreciation for his Thomas and Diane Tustin Redlands Fund scholarship, which covered the majority of his tuition costs.

“The ability to have such an interdisciplinary major was invaluable for internships and job offers. I can state with unwavering certainty that I have been given the tools to propel myself further.”
—Jacob Kern '17