3-2 program allows student to study both music and engineering

When David Reyes ’18 was younger, he told his parents he wanted to work with his dad in manufacturing. But when his dad told the rest of the company, David faced a request. “My dad’s coworkers told me that the only way they would allow me to work with my dad was if I was his boss,” he said. Now that the younger Reyes is nearing the end of the 3-2 Engineering program at the University of Redlands, it seems as though that could happen.

But he has to go to Columbia University first. By the time David graduates, he will hold a B.M. in Music Performance from the University of Redlands and a B.S. in Mechanical Engineering from Columbia. 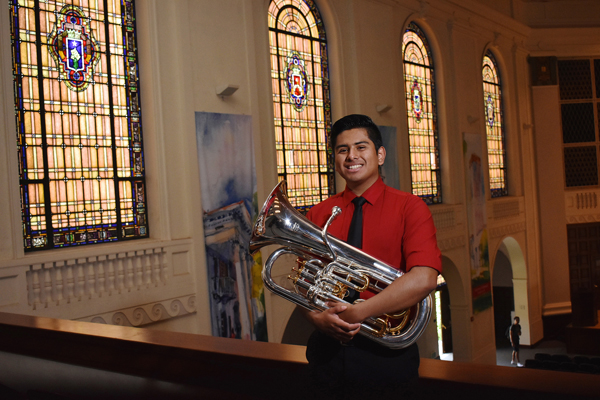 Originally from Murrieta, Calif., David didn’t know what he wanted to study when it came time to apply to college. With a love of physics and a talent for playing the euphonium, he applied to the University of Redlands after learning that his band director was an alumnus. “When I got accepted, I found out about the 3-2 program,” he said. “That allowed me to study both engineering and music.”

He credits his advisor and other faculty members for helping him through a four-year program in three. “When I went to the dean of the School of Music, Professor Glendening, he said it would be challenge but he never told me I couldn’t do it,” David said. “And any time I had a scheduling conflict, Dr. Hill was there to help me.”

His interdisciplinary experience at the University of Redlands has taught David to work through challenges. “My ear training courses taught me that I can always learn more,” he said. “I didn’t know if I could do engineering, but I told myself that I could take some classes and try to learn.”

Outside the classroom, living in Anderson Hall and being a member of Phi Mu Alpha, the fine arts fraternity, gives David a sense of community on campus. Coming from a family of percussion and brass musicians, the designated music floor in Anderson has made him feel right at home. “It’s awesome to just walk down the hall and be able to find someone who will help you with a piece of music,” he said. “No one judges you and everyone’s very supportive.”

In his spare time, David works as a stage manager for the Redlands Symphony, honing skills that he hopes will get him a job when he’s at Columbia. “I record and livestream most of the concerts and provide personal recordings for people who ask,” he said. “It’s cool because all the first chair players in the symphony are professors on campus.”

As a son of immigrants, David takes the long view. "My parents' dream when they immigrated was to give me the tools to succeed," he said. "I want to be able to do that for my kids someday."

“When I got accepted, I found out about the 3-2 program. That allowed me to study both engineering and music.”