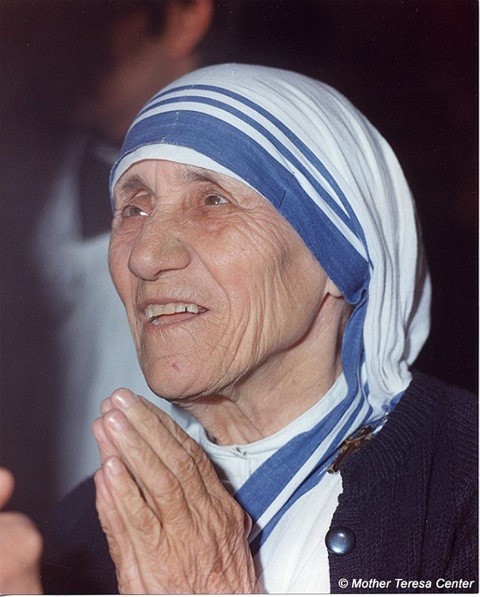 In May 2015, we hosted an international exhibit on loan from the Mother Teresa of Calcutta Center.   The exhibit illumined the life and work of 1979 Nobel Peace Prize winner Mother Teresa, considered by some to be one of the greatest humanitarians in history.  In 2016, when Pope Francis canonized Mother Teresa as a saint, Professor Fran Grace attended the ceremony in Rome, invited by a nun in the Missionaries of Charity, the Catholic order founded by Mother Teresa to serve “the poorest of the poor.”

Students in the Compassion course study the life and philosophy of Mother Teresa, alongside those of the Dalai Lama, Gandhi, Viktor Frankl, and Nelson Mandela.  They put into practice her teaching, “Do small things with great love.”  In 2017, the students gave a moving account in a radio interview about the life lessons they learned from Mother Teresa.

If I ever become a Saint–I will surely be one of ‘darkness.’
I will continually be absent from Heaven–
to light the light of those in darkness on earth.

~ Mother Teresa, quoted in the Exhibit