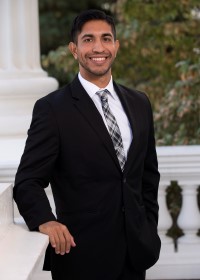 When Anthony DiMartino got to University of Redlands, he wanted to be a football player. By the time he left, he resolved to spend his life helping others.

DiMartino had never imagined himself working in government until he walked into the Community Service Learning Office at Redlands. He spent three years there helping to run CHAMPS, a program that connects high school students with college-going mentors.

“(The Community Service Learning Office) quickly became my home,” he said. “It was a life-changing opportunity for me.”

In 2011, after earning his bachelor’s degree in psychology from Redlands, he went to UCLA for his master’s degree in social work. While studying at UCLA, he encountered an idea that put him on the path to politics.

He was in Sacramento for Lobby Day, a social workers advocacy event, when he heard a speaker say that social workers should take political action because of how legislation affects their mission.

“That really resonated with me,” DiMartino said. “From that moment on, I decided that I would act locally while doing what I could to get to the state level.”

After that event, he took an internship at Long Beach City Hall. This turned into a part-time job for about two years. Then, in 2015, he was one of 64 students among the 1,200–1,400 that apply annually to win the Capital Fellowship.

Now he spends his days in the assemblywoman’s office serving the public, a dream that began to form during his many conversations with Tony Mueller, the director of the Community Service Learning Office at Redlands.

“We talked about policy in the surrounding area… it wasn’t anything specific, but just that he had the trust to engage with me (was important),” DiMartino said.

The financial assistance he received at Redlands was also a big factor in putting him on this path, he said.

DiMartino’s dad was working in facilities maintenance at Cal State San Marcos and his mom was a clerk for a local school district, so though his parents pushed him to go to college—he was the first in his family to do so—he wasn’t sure how he would pay for it.

Then he received the Cal Grant and a president’s scholarship award which allowed him to enroll at Redlands.

“Without that help, I don’t think I’d have the opportunity that I have today to pay the favor forward,” he said.