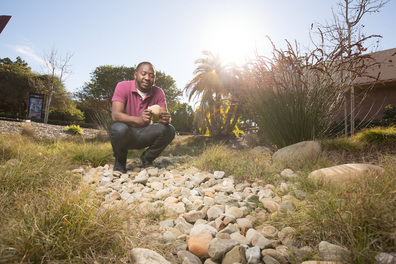 For Damilola Eyelade MS GIS ’12, a project in the Mojave Desert reinforced a longtime interest in hydrology

“Water impacts us a lot,” says Damilola Eyelade MS GIS ’12. “It’s all around us but sometimes we neglect to think about it.”

Growing up in Nigeria, Eyelade saw firsthand what happens when you ignore the power of water. He remembers a small lake behind his house that supplied the community.

“A mile down the road they built a road over one of its tributaries, without even a bridge over it. So, it kept getting washed out, and they kept resurfacing it," he said. "Water is really important. If you don’t take cognizance of it, it can cost you a lot down the line.”

After considering several schools, he chose Redlands, partly because the professors were so enthusiastic and welcoming.

“It feels like one huge family,” says Eyelade, who also appreciated the proximity to Esri, the world’s leading GIS company. An additional factor was the major individual project that replaces the thesis and engages students with real-life problems to solve.

“The purpose is for students to learn practical applications and at the same time help with the local community,” says Assistant MS GiS Professor Ruijin Ma. “Every student has a different interest.”

For Eyelade, who is now pursuing a Ph.D. in hydrology at UC Santa Barbara, a project proposed by Fort Irwin U.S. Army base in the Mojave Desert, piqued his interest.

As part of the Army’s Net Zero initiative—aimed at creating sustainable solutions to reduce their impact on the environment—leaders at Fort Irwin were interested in increasing the amount of rainwater they could return to the aquifers.

Traveling out to the desert, 40 miles northwest of Barstow, Eyelade marveled at the aridity of the desert landscape.

“When it actually rains, though, it feels like it’s raining on concrete. Very little percolates into the ground and you suddenly have flash floods.”

To ascertain the best locations for potential water capture in percolation/evaporation ponds, Eyelade examined such factors as amount of annual rainfall, rainfall per event, peak amount, amount of runoff and soil quality.

Using GIS tools, and some of his own programming, Eyelade assembled and analyzed multiple layers of data on geology, elevation, slope, precipitation and land use, coming up with a recommendation for the optimal places to capture and store water from rainfall.

Those turned out to be about a mile upstream and some yards away from the washes that feed the dry lake beds where storm water pools up after rainstorms.

“I had fun working on this project,” says Eyelade, who was a Morrison Fellow (made possible by the Marvin R. Morrison Family Trust) while at Redlands. “It enabled me to pick up new technical skills as well as a deeper understanding of water in arid areas. I have been able to apply some of this new expertise to other projects back home in Nigeria, and in a way doing this project led to me starting my Ph.D. looking at more water management issues.”