Scott Randolph named "Professor of the Year" by Redlands students 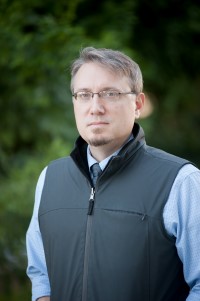 Students have described Assistant Professor of Business Administration Scott Randolph as “exceptional,” “encouraging,” “dedicated” and “challenging.” On March 8, the Students of Mortar Board will present him as College of Arts and Sciences 2015-2016 Professor of the Year at a President’s High Table.

No stranger to the student-driven award process, Randolph has been nominated for the honor every year since 2012. The award itself has existed since 1959.

“What I admire about Dr. Randolph is his dedication to upholding the standards of the classroom,” wrote one student on the survey asking students to nominate a professor. “Although his class is challenging, he does not ask you to do something that he would not do himself.” Another student wrote that, “he strives for and demands excellence from his students,” and “his methods of teaching are by far the best I have experienced”

Randolph noted that he was deeply honored and humbled, to have received this honor.  “For me there are two honors here, one is the selection itself, and the other is to have been considered worthy of inclusion with such a superlative group of fellow nominees. It provides such powerful evidence of the ways in which Redlands is truly a place where teaching is honored, respected and rewarded.”

A history of accomplishment and service

Randolph graduated from Rutgers University with a B.A. in History and went on to receive his master’s from the University of Akron. He later earned his Ph.D from Purdue University. Randolph has taught at Purdue, the University of Wyoming, and at Armstrong (Atlantic) State University and in 2011 joined the faculty of the University of Redlands. His areas of research include the culture of capitalism, transportation history, with an emphasis on railways and Gilded Age and Progressive Era American history.

Randolph’s engagement with the community extends well beyond the classroom. He is a mentor for the STEP Program, has served as a faculty senator, a member of the Armacost Library Undergraduate Research Award Selection Committee and works closely with admissions.

Scott Randolph will be honored at President’s High Table on Tuesday, March 8, 2016, in Casa Loma Room, at 5:30 p.m. Tickets are $20. For information and reservations, contact Cheryl McIntosh atcheryl_mcintosh@redlands.edu.

Mortar Board is a national honor society, established in 1918, that recognizes college seniors for excellence in the areas of scholarship, leadership and service.