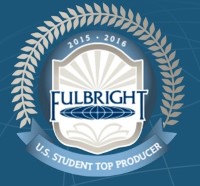 Three researchers from the University of Redlands are traveling the globe in the 2015-16 academic year to conduct medical research, environmental research and anthropological study. These three exemplary students, now alumnae, are the most recent of 20 total Fulbright Student awardees at Redlands, which this week was designated as a “Top Producer of Fulbright Students” for the 2015-16 year.

This is the third national recognition for Redlands as a top-producing master’s institution, which this year is one of only 25 master’s institutions to share the prestigious designation, according to the Chronicle of Higher Education Fulbright ranking. The University was first recognized in 2008.

“We are pleased to learn that our students continue to achieve recognition for their outstanding academic accomplishments as Fulbright Students,” said University Provost Kathy Ogren.

Professor Jack Osborn, who mentors Fulbright candidates, attributes the University’s success in the program to a combination of student quality and department support. “Our faculty have made a commitment to the program, encouraging their best and brightest to apply and hoping for them the incredible opportunity to go out into the global community and conduct research or service.”

The University’s 20 Fulbright Students have traveled to Germany, Mexico, New Zealand, Guatemala, Norway, Spain, Japan, Morocco and Taiwan—10 to conduct research and the other 10 to teach. Their majors include global business, international studies, languages, biology, communicative disorders and music.

“One of the University’s missions is academic excellence. Clearly the Fulbright program reflects that. It is highly competitive—our students compete with individuals from Ivy League schools and every liberal arts college in the United States,” Osborn said.

The three Redlands recipients of 2015 Fulbright awards—considered the highest and most competitive awards for overseas research or teaching from the federal government—are:

Stefani Spence’15, double major earning a bachelor’s degree in environmental studies, and a bachelor’s degree in Spanish. Scholar to Centro Interdisciplinario de Investigacion para el Desarrollo Integral Regional, Unidad Oaxaca, Mexico, for research on the indigenous Chinantec community of San Pedro Tlatepusco and the impact of the bracken fern on their lives and agriculture.

About the Fulbright Program

The Fulbright Program, sponsored by the U.S. Department of State’s Bureau of Educational and Cultural Affairs, is the U.S. government’s flagship international exchange program and is supported by the people of the United States and partner countries around the world.