Tracking whales and dolphins to better understand how humans affect their lives.

With a boat deck serving as her classroom and the ocean as her laboratory, Redlands Associate Biology Professor Lei Lani Stelle is teaching her students how to research human impact on marine mammals off the Southern California coast. 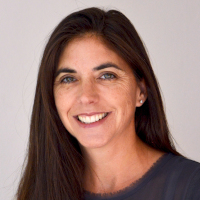 The West Coast is familiar territory to Stelle, a Hawaii native who grew up in Huntington Beach, Calif., exploring tide pools, sailing to Catalina Island and scuba diving since age 12.

Through the University’s Student Science Research program, Stelle’s undergraduate students are funded to work with her on research fulltime during the summer. At the end of 10 weeks, students produce a poster illustrating their work and findings to present at the program’s annual research poster symposium.

The ultimate goal of the work is to develop strategies to reduce risks to the marine mammal populations Stelle and her students are studying.

The students also conduct individual research projects such as analyzing sea lion behavior and examining whale respiration patterns. Elise Walters ’16 (Hunsaker Student Science Researcher) focused her capstone project on identifying bottlenose dolphins by their dorsal fins to estimate their number locally. Through the summer internship she also worked with Stelle on data collection to see firsthand the impacts humans have on animals.

“We saw numerous sea lions with rope or fishing line embedded in their necks, and there are a few whales in the area that have massive scars from entanglement or boat collisions,” says Walters.

The work of Stelle and her students has been based out of Dana Point, with the support of Dana Wharf Whale Watching, traveling as far north as Newport Beach, south to San Onofre and offshore to Catalina Island. A typical day of study can include up to five hours on the boat and two hours of shore observations—looking for whales from the cliffs or recording sea lion behavior from the jetty.

Stelle’s original focus of study was gray whales, but that broadened once at Redlands. “We were out on the ocean, seeing all sorts of animals—fin whales, blue whales, humpback whales,” she says.

“The continental shelf is very near shore and the upwelling provides lots of nutrients, feeding the plankton, which supports food for marine mammals. We have a large variety of resident species—bottlenose dolphins, long- and short-beaked common dolphins, Risso’s dolphins, California sea lions, harbor seals, minke whales and fin whales. There are migratory species such as gray whales that travel past our coast during winter and spring and come very close to shore, and blue whales and humpbacks that visit to feed in the summer. Occasionally we might see other exciting species such as orcas and sperm whales.”

The diversity is unusual, Stelle adds, as is the fact that mammals are so close to the shore. On the east coast, researchers have to travel much further to find animals.

“Of course, that also means these animals are exposed to more human activity and boat traffic. We started noting the boat traffic and how the animals are impacted. Now we record everything we see on charts and through the app,” she says.

The “app” is Whale mAPP, a Web- and mobile-based application, developed by Stelle and then-MS GIS graduate student Melodi King ’12 with funding through the California Coastal Commission Whale Tail Grant. Using GIS to monitor marine mammals, the Whale mAPP can be used by anyone with a GPS-enabled Android-based device to submit information about marine mammal sightings. The information is shared and saved through an online geodatabase at whalemapp.org, where the sightings are displayed on an interactive map with recorded details and associated photos.

So far, about 100 users have collected more than 2,000 marine mammal sightings and documented more than 25 different marine mammal species. Throughout the year, Stelle conducts research through funding from the Earthwatch Institute. Some of her most engaged students volunteer, as do “citizen scientists” who connect with the project through the institute.

Stelle says the data collected is important to research in the classroom as well as in the field. When students access the site, they can view the marine mammal sightings, formulate hypotheses and test their conjectures using the collected data.“This develops the students’ scientific inquiry, spatial reasoning and critical thinking skills while increasing their knowledge of the natural world.”

“We were out on the ocean, seeing all sorts of animals—fin whales, blue whales, humpback whales. We have a large variety of resident species.”