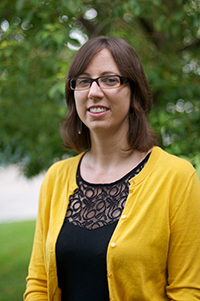 “When you study how a piece of music was created and in what context, you can listen, even across centuries, to somebody else’s sense of humor, or sense of self, or sense of place,” says Katherine Baber, associate professor of music history. When she began to think about pursuing graduate work in musicology, she delved into the music history literature. “It showed me what a narrative could do and how writing history could make music more meaningful for listeners,” she says.

After working in acquisitions at Indiana University Press, Baber wanted to return to the classroom to teach. Baber sought a position at the University of Redlands—close to where she grew up in San Diego’s North County.

“I felt I could have interesting conversations about music, art, and performance with all of the people who interviewed me,” she says. “Working at Redlands is like being part of a chamber ensemble—it takes a lot of cooperation, attention to communication, and patience, and in the end it’s incredibly rewarding.”

Baber also appreciated her return to the classroom. “The trickiest, most interesting questions come from my students,” she says. “They’re game for the larger discussions about how music relates to society, or religion, or politics, or identity, and that’s at the core of the work I do.” Seeing students learning to appreciate a piece of music that they either didn’t know about or expected not to like is the most fulfilling part of her teaching.

Baber notes that the School of Music philosophy and mission are what set it apart from other institutions. “We say we educate ‘the whole musician’ and I stand by that,” she says. “A lot of conservatories reward students who spend their whole day locked up in a practice room by themselves. But music is about communicating with your audience and the more fluent they are in other fields of study, the more they have to say through their performances.”

In addition to teaching, Baber constantly finds herself working on other projects. “I have several publications on Leonard Bernstein coming out soon, just in time for what would have been his 100th birthday,” she says. “I’m also currently working on another book manuscript… It includes a chapter on the Salzburg Festival, the research for which was made much easier by the University’s Salzburg program.”

“The trickiest, most interesting questions come from my students. They’re game for the larger discussions about how music relates to society, or religion, or politics, or identity, and that’s at the core of the work I do.”