Her days are busy and unpredictable — and she wouldn't have it any other way.

As an artist teacher of violin at the University of Redlands, concertmaster of the Redlands Symphony Orchestra, and an in-demand performer for film soundtracks, Jeanne Skrocki moves seamlessly from the classroom to the stage to the studio, able to balance teaching new pieces to students with traveling to Hollywood to record with music icons such as John Williams. 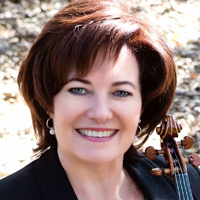 "This is not always easy, but it is so important," she says. "I think it is crucial for students to see their teachers performing and pursuing their own music careers. This shows students how fulfilling this life of music can be, and it encourages and inspires them."

Skrocki was five years old when she first picked up a violin, taking music lessons from her mother, Bonnie Bell, whom Skrocki describes as "100 percent my inspiration for wanting to teach and my example on how to teach." Skrocki began offering private training about 15 years ago and enjoys working with college-age students.

"It is such a wonderful time of transition and learning and I love getting to be a part of that process in their lives," she says. "In the course of our lessons they establish a musical journey, and I help them find the right path for their goals. It is so exciting."

The University of Redlands School of Music’s small size makes it possible for Skrocki to know every young musician by name. "Each student gets individual attention and a great deal of guidance and input from faculty," she says. "My faculty colleagues are simply the best — incredibly educated, talented, knowledgeable, and caring of the students."

One of the best parts of being a teacher, she says, is working with students ahead of concerts and recitals, and then sitting in the audience, watching as they finally perform onstage in front of a rapturous crowd. "I am so happy to see their efforts result in success,” she says.

Years before she arrived at the University of Redlands in 2008, Skrocki got her start in Hollywood, making her film debut in 1993 on the Free Willy soundtrack. Since then, she has recorded music for more than 200 major motion pictures, including Frozen, Pirates of the Caribbean, Memoirs of a Geisha, Catch Me If You Can and Indiana Jones and the Crystal Skull.

While working on Indiana Jones and the Crystal Skull, star Harrison Ford came to the scoring stage to say hello to the orchestra, and "you could feel the air just leave the room when he walked in," Skrocki says. During the second week of recording, the original music from Raiders of the Lost Ark was out on the stands, and the musicians re-recorded the theme song for a CD. Skrocki remembered seeing the original Raiders film as a young girl, never dreaming that she would one day play the film score.

Skrocki appreciates having the opportunity to work with exceptional musicians of all ages, and says the students at the School of Music are a special group of young adults. “There is so much potential and talent and it is truly a privilege to have a part in helping them find their way,” she says. “[Music] is not always an easy road, but it is a rewarding one and worthy of all the hard work and perseverance."

"It's crucial for students to see their teacher performing and pursuing their own career in music. This shows students how fulfilling this life of music can be, and it encourages and inspires them."