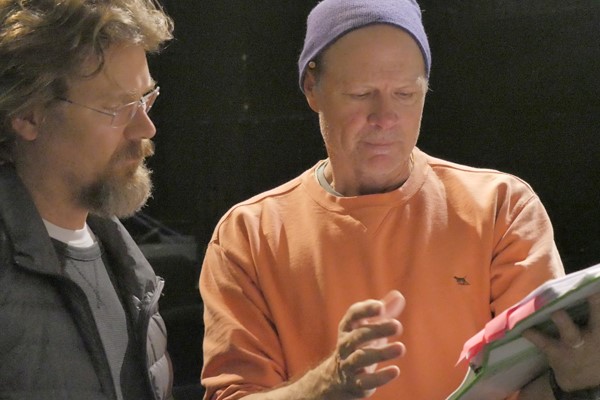 A fixture in the Theatre Department since 1993, Chris Beach has directed students in scores of productions at the University. In 2017, however, he'll embark on a first-time venture as he takes Hamlet—and around 14 to 18 student actors—to the Edinburgh Festival Fringe.

Performing at the Festival is an honor—many apply, few are chosen—and Beach has wasted no time applying maximum creative energy to the project. In collaboration with University of Redlands alumnus Doug Hammett ’85, a visual artist working in the performing arts sphere in Pasadena, Beach set out to envision new ways to interpret the Shakespearian tragedy.

“The notion of espionage, hiring spies and tracking the activities of one’s enemies within Elsinor kingdom and castle is resonant with surveillance today,” he says. “So we moved our concept of the piece into a not-too-distant dystopian future where technology exists but Elizabethan is spoken.”

The creative partners developed their ideas, with plenty of student input, in a May Term course, where Hammett brought in puppetry and video and experimented with QLab, a computer interface that works with projectors.

“We were able to try out a whole bunch of really cool possibilities in the May Term workshop,” says Beach, who encouraged the students to let their imaginations run freely. “What if Hamlet and Rosencrantz were lovers in college? What if Guildenstern is a woman? What if Fortinbras is trying to hack into Elsinor to weaken it, and one of the strategies is to create a cyber spirit?”

Beach also experimented with casting ideas, bringing in several adult actors to perform alongside the students. The decision gave Redlands students an opportunity to interact with more working professionals.

The Mathematics Department’s Steve Morics will play Polonius, with Professor Heather King from the English Department in the role of Gertrude. King will also teach an Adapting Shakespeare class focusing on Hamlet next spring.

“The notion of espionage, hiring spies and tracking the activities of one’s enemies within Elsinor kingdom and castle is resonant with surveillance today."