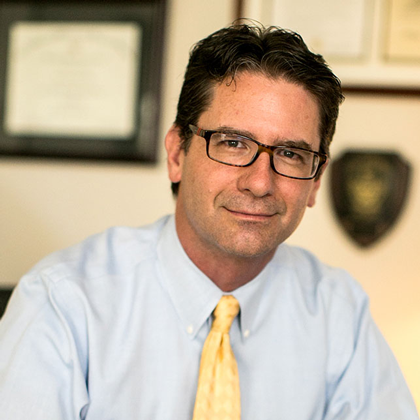 Lewis “Lew” Glenn was born in Monterey, California, into a career Navy family, and grew up across the United States and overseas. He graduated from Marina High School in Huntington Beach, California, and attended the U. S. Naval Academy in Annapolis, Maryland, where he was a member of the offshore sailing team. After graduation, he served as a Surface Warfare Officer on a Spruance-class destroyer and as Destroyer Squadron Four staff, both based in Charleston, South Carolina. After five years, Lew left the Navy to attend law school at the College of William and Mary, where he met his future wife, Krista Newkirk. While in law school, Lew was a member of the Law Review, and was admitted to the Order of the Coif at graduation.

After graduation, Lew and Krista moved to North Carolina to begin practicing law, soon settling in Charlotte, where they would remain for the next 17 years. They were married in Wilmington, North Carolina, in 2000.

In 2016, Lew and Krista moved to Spartanburg, South Carolina, when Krista was appointed President of Converse College (now Converse University). While Lew continued to practice law, he took on a new role as First Gentleman, and was honored to support both Krista and Converse in that capacity. While in Spartanburg, Lew also served on the Executive Committee of the Board of Trustees for the Chapman Cultural Center, which provides major funding and support for local arts and cultural organizations.

In 2021, Lew and Krista set off on yet another great adventure, moving to Redlands, California, where Krista began her presidency at the University of Redlands.

Lew continues to practice law as a partner at Ascension Law in Charlotte. His law practice is focused on litigation, particularly real estate and other commercial matters, professional liability defense, employment (including administrative agency proceedings), catastrophic personal injury defense, and insurance coverage disputes. He is also a North Carolina Dispute Resolution Committee Certified Superior Court Mediator and acts as both a neutral evaluator and arbitrator. He is admitted to practice in both North Carolina state and federal courts. He has served as a member of the Mecklenburg County Bar Foundation Board of Directors and is a member of the Mecklenburg County Bar Association, where he has served as the Chair of the Professionalism, Lawyer Life and Culture Committee.