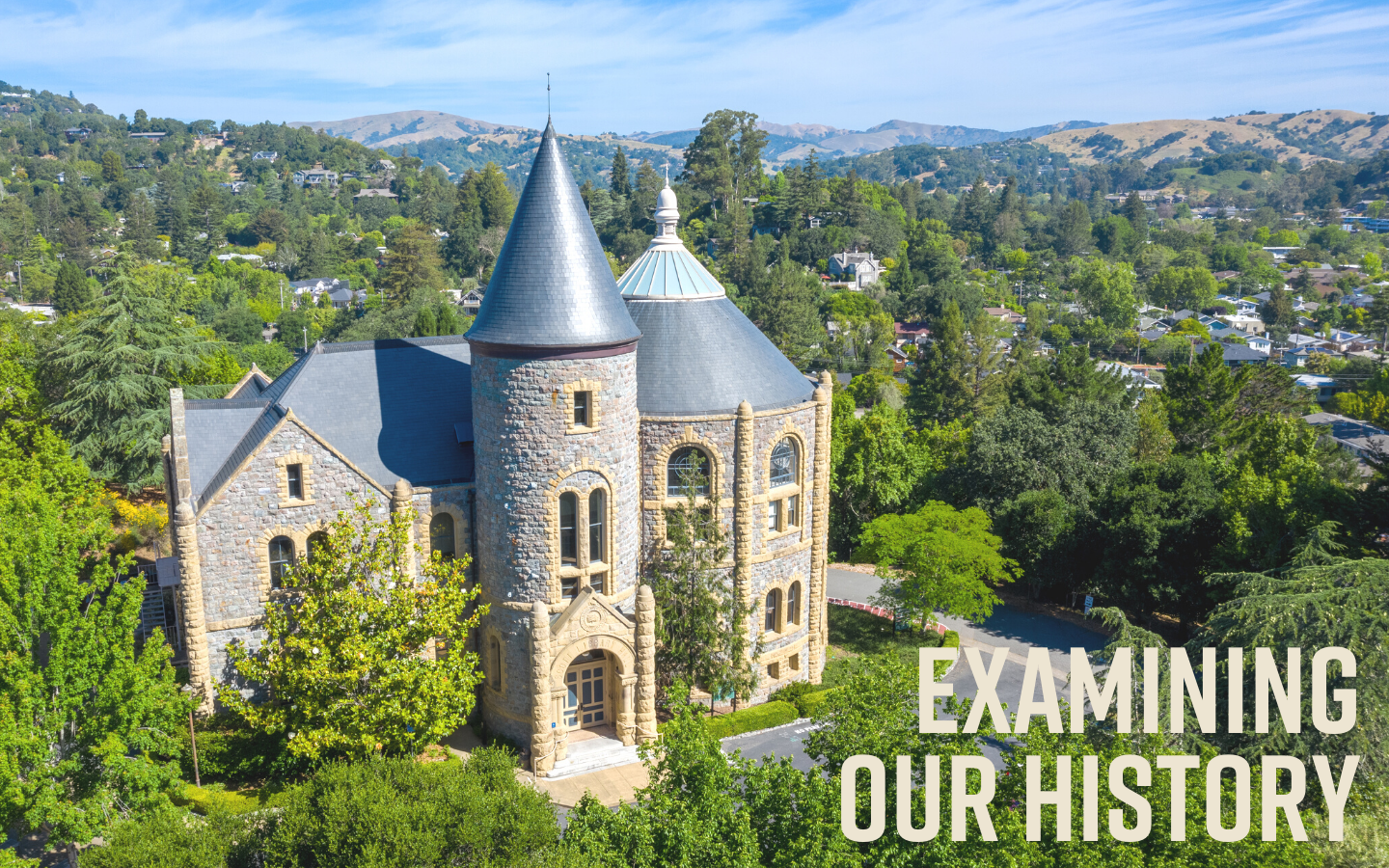 San Francisco Theological Seminary was founded in San Francisco 150 years ago at the initiative of the Rev. Dr. William Anderson Scott. I think Scott was a complex, problematic person. He grew up on the Appalachian frontier in eastern Tennessee in the early nineteenth century. He served as a chaplain in the war against Ma-ka-tai-me-she-kia-kiak, or Chief Black Hawk. Ma-ka-tai-me-she-kia-kiak led a coalition of Sauk, Fox, and Kikapoo families who had been driven west across the Mississippi River as white people arrived. The coalition fought their way back into northwestern Illinois in 1831. They were driven out by federal soldiers and Illinois militia in the summer of 1832. Black Hawk’s defeat “opened” the Upper Midwest to white settlement, which is a gentle way of saying that news of the brutality of the war, which killed about 500 first-nations men, women, and children, travelled, and as white people spread into the northern prairie, many of the Indian bands scattered. The founder of the seminary was there.

This child of the Appalachian frontier became a chaplain on President Andrew Jackson’s estate outside Nashville after the president’s second term, and then, promoted by Jackson, he became a prominent pastor in Alabama and in New Orleans, at a time when the population of the city swelled with English-speakers in the 1840s. He was one of many slave-owning clergymen. Before the Civil War, Scott felt emphatically that slavery was a morally degrading institution, yet he defended it as a property holder’s civil right. So he promoted the manumission of slaves, but also their relocation to Liberia, the west African colony set up for this purpose. He owned slaves. He manumitted slaves. Personally, I don’t think context or time excuses a person for any defense of this disgusting institution, any more than being a German in 1938 excuses a person for being an anti-Semite, or being a man in antiquity should excuse him from treating spouse, children, and slaves as property. Any defense of slavery is abhorrent, whose aftereffects in American society remain a terrible, frightfully lingering blight.

One of the first things Scott did when he came to San Francisco in 1854, at the invitation of several businessmen who organized Calvary Presbyterian Church, was establish a college. In the south, he had been deeply committed to education and helped to establish two women’s academies in Tennessee and Alabama. So too, in San Francisco. University College opened in Calvary Church in 1861, when the church was located on Union Square. The square was where Thomas Starr King, pastor of the city’s First Unitarian Church and the west’s most prominent abolitionist, led rallies in support of the union armies during the Civil War, which broke out in the year of the Presbyterian college’s founding. Scott, by contrast, was detested in San Francisco for defending the Confederacy, and a mob drove him from the city eight years after he arrived. It was a moment of unusual moral clarity along the “Barbary Coast,” and I would say a well-deserved rebuke, even if it was delivered lawlessly by the city’s vigilante justice.

When Scott came back to a tamer San Francisco in 1870 as the pastor of St. John’s Presbyterian Church, then at the foot of Nob Hill, University College was still going (it had even tried to open a medical faculty). Scott now wanted to complete the college with a seminary. He rallied his peers in the presbytery and synod, and San Francisco Theological Seminary was born in October 1871. Our first classes took place in the college, in Calvary Church, and in St. John’s. College and seminary moved to Haight Street in 1877, ninety years before the Summer of Love transformed the city. In 1891, the seminary moved again, to Marin County, at a place called Junction, after the train lines that met here before the town of San Anselmo was incorporated.

The school quickly settled into the two new “Richardsonian Romanesque” buildings on its capacious hill below Mt. Tamalpais, near the place at the northern extreme of what was, until a short while before, the Punto de Quintin ranchero. One of the bayside properties first colonized for ranching by the Franciscans of San Francisco, the Punto de Quintin ranchero was the product of an 1840 Mexican land grant. The name is said to have come from an indigenous chief, perhaps a leader of the Coastal Miwok or possibly a leader of another tribe indentured by the Franciscan mission in the city. The Mexican grant-holder was an English immigrant named John Cooper, an early deforester operating out of Monterey. Like a lot of Mexican real estate in California, large tracts of rancheros were broken up into smaller and smaller parcels over the first decades of US statehood. Three decades and three transactions after California entered the Union, one small portion of the Punto de Quintin was purchased by a Presbyterian named Arthur Foster. Foster was William Anderson Scott’s son-in-law. He donated the property to the Presbyterians for their young seminary. The seminary is only six transactions away (seven if you include the University of Redlands) from the traditional owners of the land and from the trauma of early missionary disruptions.

Before he died in 1885, Scott had hoped to revive the faltering college. The Presbyterians, by that point, had cast their lot with the seminary’s slightly older sister, the University of California, whose origins trace to the initiative of another San Francisco Presbyterian minister, Samuel Hopkins Willey. San Francisco’s Presbyterian college was never revived in Marin. But the seminary soldiered on, through numerous cycles of growth and contraction, always a hub of extraordinary scholarship and the nurturing parent of graduates who did, and still do, remarkable things across the world. In a very unexpected way, SFTS returned to its early vision in 2019, when it joined the University of Redlands. The seminary has always been a laboratory for innovative spirituality and theology, knowledge by revelation and critical thinking. The stamp of its early history in San Francisco, an adolescent city, has lingered in its faculty, whose scholarship has almost always been oriented toward society and social change. Since 1962, we, mostly Presbyterians, have been happily married to other Christian traditions and other faiths in the GTU. And in a way, in our recent marriage with the University of Redlands, the seminary’s programs have finally realized what I think was one of the noblest ambitions of the founder of the seminary: a school of theology located within a university dedicated to experiential learning, reflective understanding of the world, and knowledge that yields meaning. Scott and his colleagues in ministry knew, as the SFTS faculty still does, that the proper place for theology is learning in the world, and learning for a world that has much to repent while it grows into all that God means for it.

In the middle of your seminary’s 151st year, the faculty is thinking about the untidy entanglements created over a long history. They include the founder who not only embraced but shamelessly defended America’s original sins. They include the bitter irony of our beautiful campus, like every inch of this continent, acquired under the long shadow of violent displacements and injustices. How does a Presbyterian school come to be 150 years old? It comes scarred, humbled, penitent, resilient, stubborn, but unafraid to face itself and change.

With this in mind, the SFTS Board of Directors in their January meeting have decided to study ways to repudiate Scott’s defense of slavery, as part of the seminary’s ongoing efforts to recognize and dismantle the implicit systems that perpetuate and reinforce racism in schools, and seminaries, and churches today. In the next weeks, a task force will be formed. It will include representation from the Board of Directors, alumni council, faculty, and students. It will study the three names associated with the oldest buildings on campus, and will formulate recommendations to address injustices, such as the defense of slavery, that may be associated with these names. We hope the task force will be ready to report its recommendations to the next meeting of the Board of Directors in late April, 2022.