Events and Happenings at SFTS

Welcome! We offer a variety of on campus events in San Anselmo, as well as unique opportunities for study abroad. Scroll down to explore. 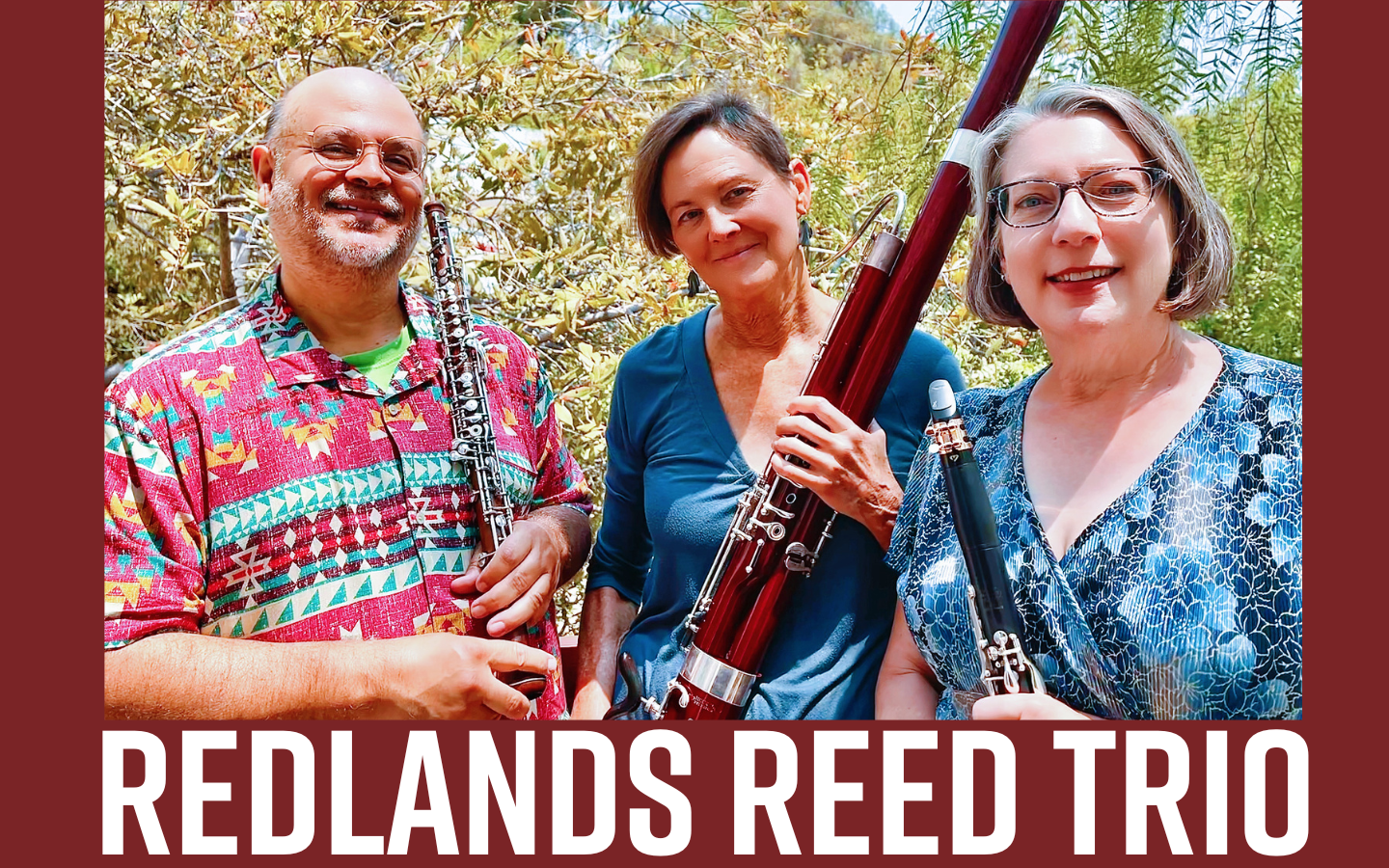 Join us for this FREE event, all are welcome! University of Redlands Conservatory of Music Artist Faculty Francisco Castillo, oboe, Kathryn Nevin, clarinet, and Carolyn Beck, bassoon, bring audiences a concert with a pleasing mix of old and new. The program features 20th century masterworks by French composers Jacques Ibert and Joseph Canteloube, alongside music of California composers Deon Price, Adrienne Albert, and fellow Conservatory faculty Andre Myers. Price’s “Crosswinds” is specially arranged for the Redlands Reed Trio for this performance, and selections by Albert and Myers were recently premiered by the ensemble in 2022. 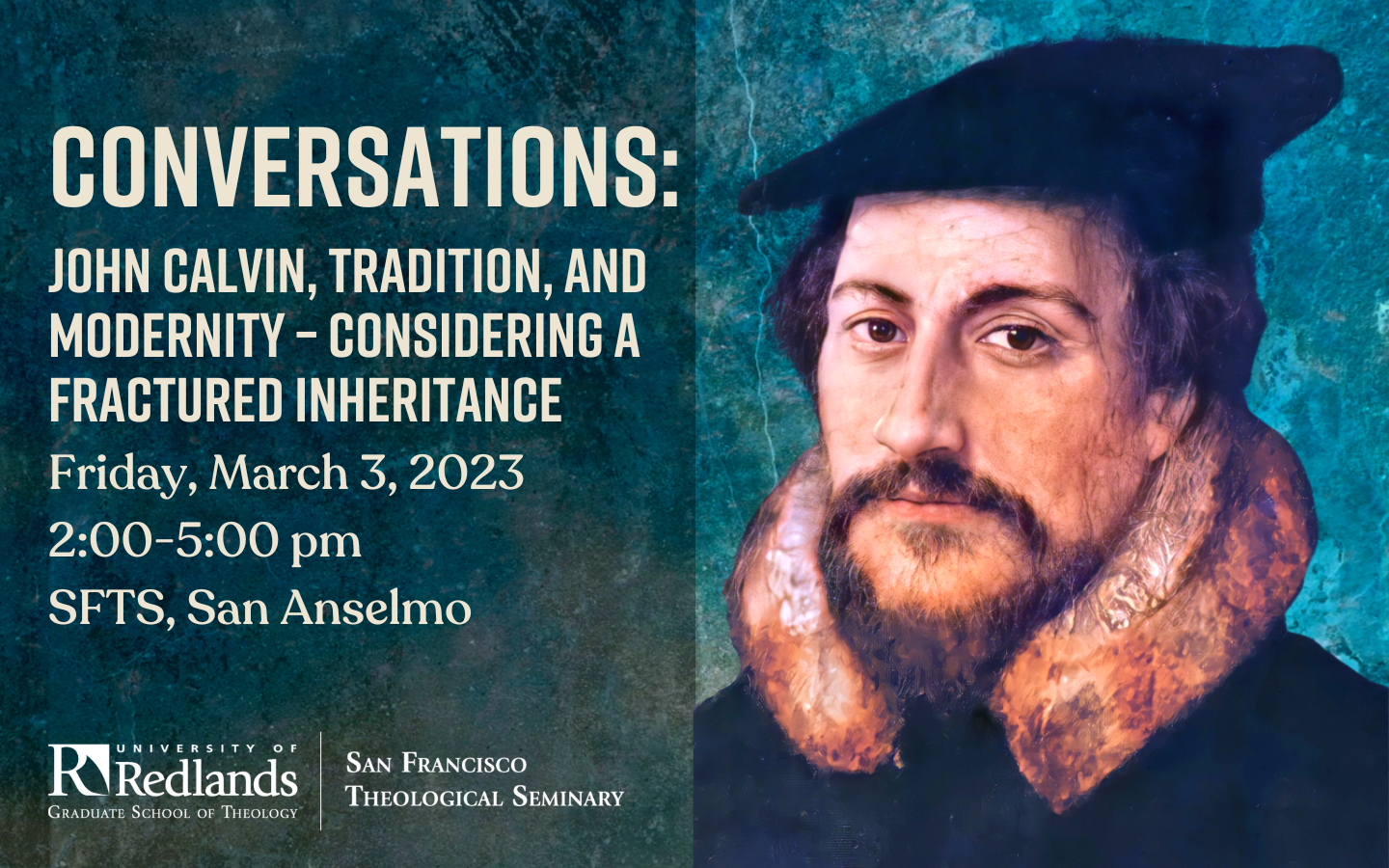 JOIN US for a conversation about Calvin, the character and legacy of the Reformation(s), and the modern world, with Prof. Ward Holder and other experts, on the occasion of the publication of Holder’s recent book, Calvin and the Christian Tradition: Scripture, Memory, and the Western Mind. 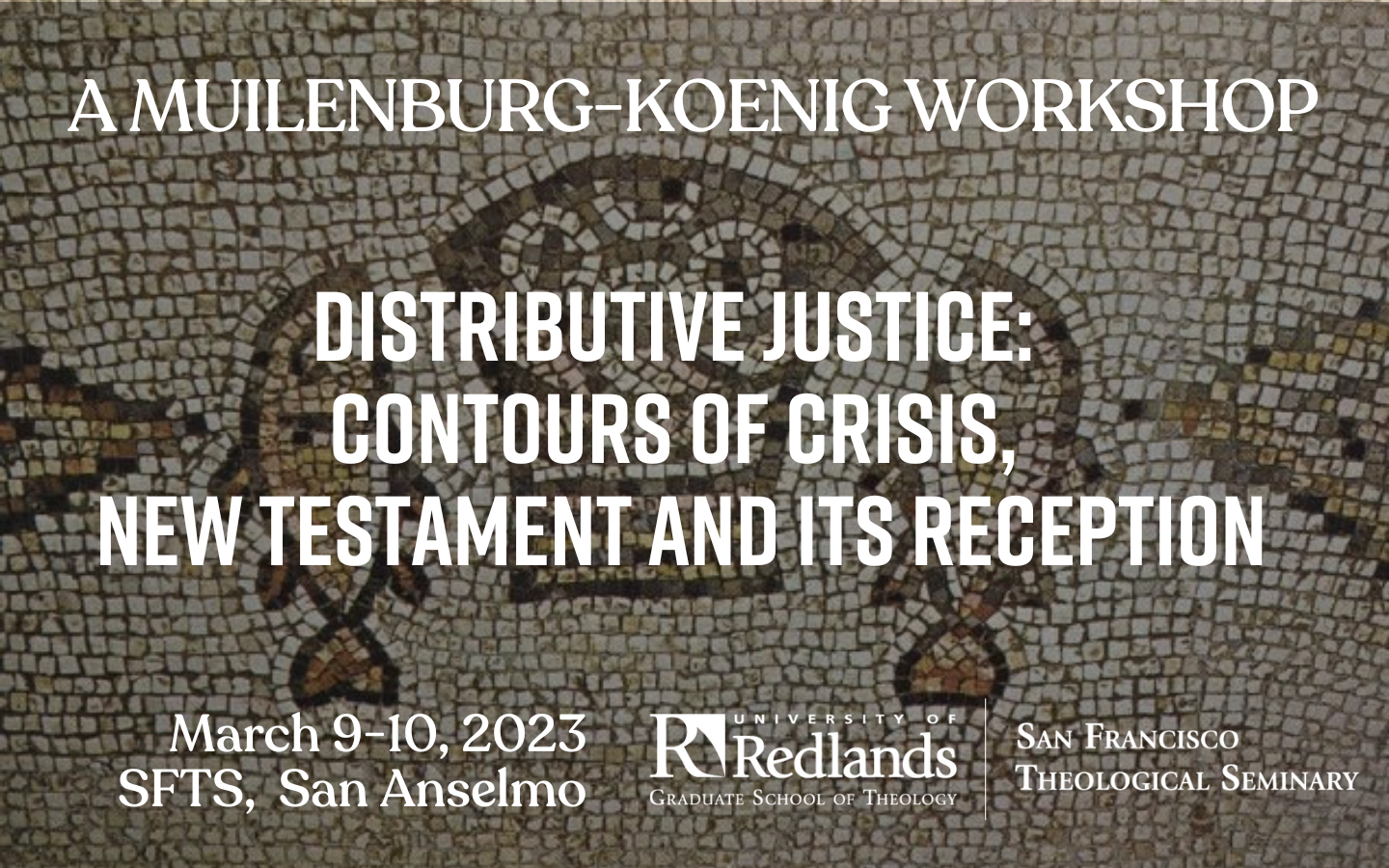 Over the past two decades, scholars have increasingly focused attention on two contrasting features of the Bible: 1) themes of resistance to empire in the New Testament, and 2) the growth of imperialist interpretations of New Testament texts in emergent and subsequent Christian discourse. Many argue that it is impossible to disconnect the web that binds contemporary issues of poverty, climate change, identity, and recurring violence from colonialist renderings of biblical texts. Some link an “imperialist” dimension to the NT canon itself, observing that the NT bears both imperial and anti-imperial imprints. It is difficult to ignore the roles that Bible and Empire have played in fostering a global legacy of chronic distributive imbalance. Likewise, the work of reframing ‘biblical’ teaching grows ever more urgent.

The purpose of this workshop is to explore the ancient contours and later global legacies of distributive justice (and injustice) in the Bible from a range of disciplinary perspectives. This will involve examining New Testament passages in their Jewish and Roman contexts, as well as critical study of the imperialist uses of such texts and the derivative legacies of transmission, interpretation and re-appropriation. To accomplish this purpose, the workshop will bring together both scholars of New Testament and scholars in other fields (literature, political science, Islam, the natural sciences, medieval history), to show how a broad study of the New Testament/Early Christianity bears on contemporary issues related to unequal distribution of resources and opportunities, such as poverty, climate change, identity, and violence. 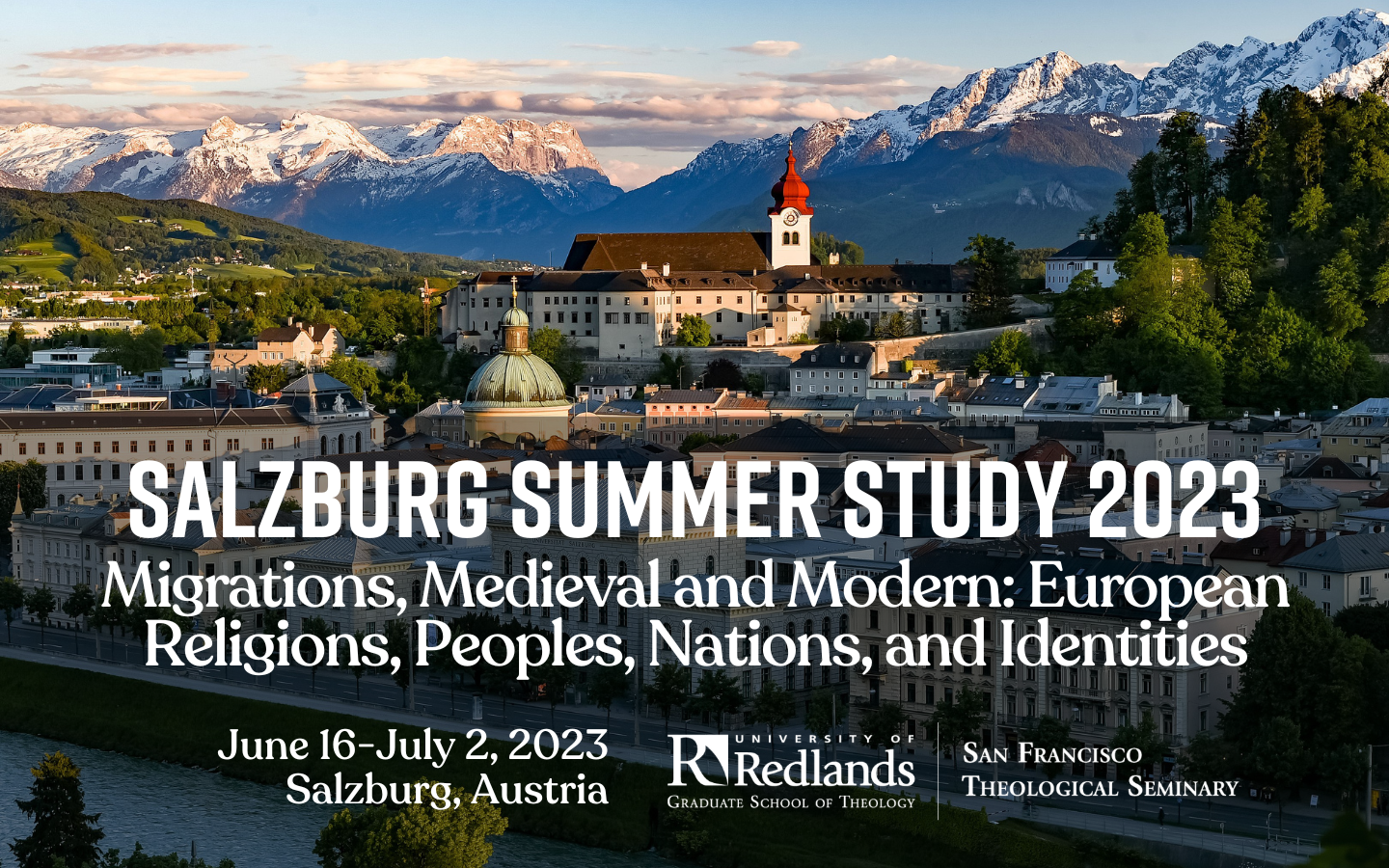 JOIN US alumni, students, and friends! A course with Christopher Ocker, SFTS Dean and Professor of the History of Global Christianity, and Wolfgang Schmutz, Professor at the University of Redlands Salzburg Semester. 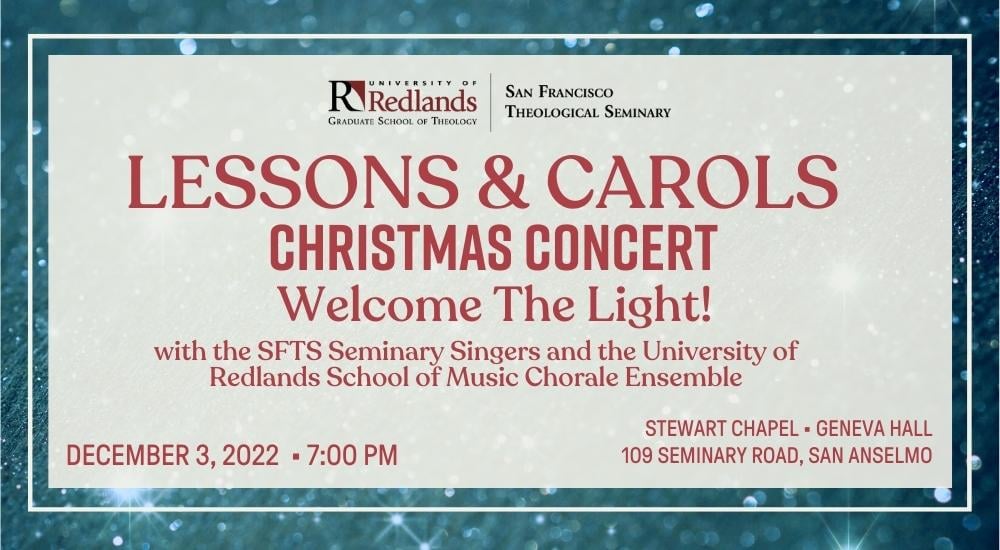 Welcome The Light! JOIN US for a very special evening of worship and music as we celebrate the Holiday season. The SFTS Seminary Singers and the UR School of Music Chorale Ensemble will be performing their celestial sounds. All are welcome.

The event is FREE, but if you would like to support our community programs, we would greatly appreciate an offering to the  SFTS Shaw Chaplaincy Institute at this link:  redlands.edu/supportsfts.

What does theology say about embodiment? What do bodies say about theology? Wendy Farley writes, it’s time to pay attention to what excluded bodies have to say to theology. Jon Berquist says, the way we understand bodies runs parallel to the way we understand society and God, and so it was in ancient times, in the many competing views of bodies and embodiment present in the Hebrew Bible.

JOIN US for an informal lunch, a panel discussion with Farley and Berquist and the faculty of San Francisco Theological Seminary, and a “Incarnational Spirituality Lab,” in which participants will together reimagine how theology can be embodied in liturgy, practice, and social justice. We will conclude with an Embodiment of Prayer led by Marcia McFee. 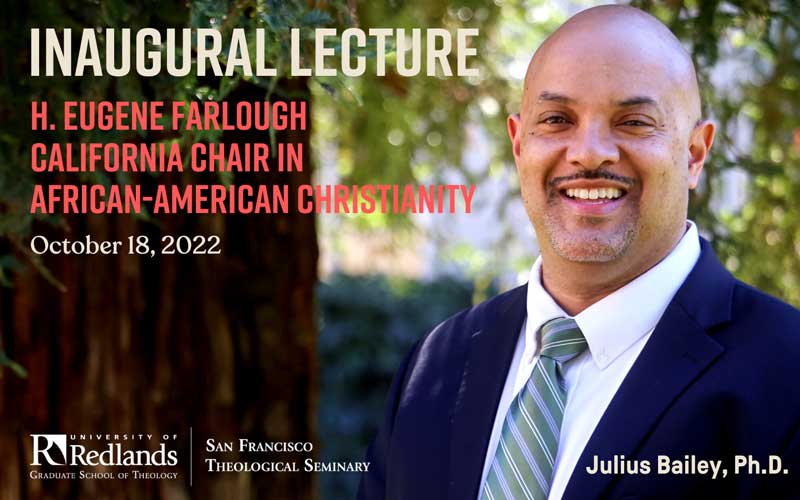 The Inaugural Lecture of Julius Bailey as the H. Eugene Farlough California Chair in African-American Christianity.

Watch a recording of the event