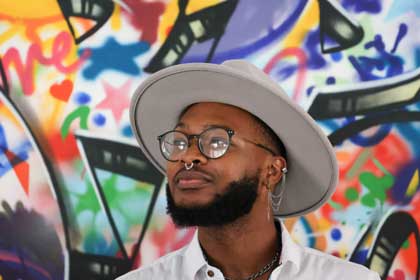 David Hazward’s career at the University of Redlands is defined by his unwavering commitment to matters of social justice. For four years he served as an intern at the Center for Diversity and Inclusion (CDI). He was an active leader in the Black Student Union and Gamma Delta Rho, a fraternity for men of color. David helped to organize successful events such as the inaugural Juneteenth celebration in 2021, the Living on Common Ground Multicultural Festival, Martin Luther King Jr Week events, and the Diversity Pride Parade. He collaborated with the Title IX office, the Johnston Center for Integrated Studies, and the Office of Career and Professional Development. David brought his art and design skills to raise awareness of marginalized communities, an effort recognized in a September 2021 Bulldog Blog. Off campus, David worked with the Islamic Community Center of Redlands and the Peace Academy. He helped compile a catalog of local Black-owned businesses called “The Black Pages: A Modern Greenbook for the Inland Empire.”

What distinguishes David, however, is not the list of his accomplishments but the everyday humanity and care David brought to his efforts. Building close relationships was the foundation of his social change leadership. As one of his nominators wrote: “David greets everyone who comes into a shared space with a genuineness that makes you feel like you've always known each other.” He notices people who might otherwise fall into the background. His kindness helps them to develop their voice and power. David leans into his one-to-one relationships to understand differences so he can build the inclusive community he so desires.

David began his work as a CDI intern while Jacob Green was a Junior in the office. David looked up to Jacob and learned from him. It was Jacob's influence and easy manner that helped David find his voice. It is fitting that now in his senior year, David has done the same to influence the next generation of change agents and community builders. For all of this, we are honored to award this year’s Jacob Green Memorial Prize to David Hazward.