The Marin campus has two labyrinths: the Spirit Walk Labyrinth (a Cretan, or classical style) located at 17 Austin Avenue, down the hill between Lloyd-Dobbins Hall and Susanna Baird Hall, and the Geneva Terrace Labyrinth (a seven-circuit modified Chartres style), located at the top of Seminary Hill outside Geneva Hall. These labyrinths were funded by an anonymous gift to the Seminary and were organized, drawn, and constructed by SFTS students. 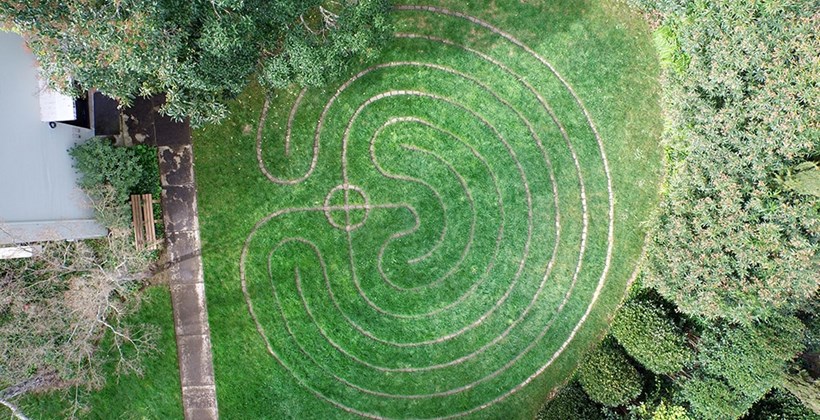 Unlike a maze, with many pathways and dead ends, a labyrinth has a single path which leads to the center and back out again. It represents a mirror for where we are in our lives, touching our sorrows and releasing our joys. A reflection of life’s journey, the spiral symbolizes growth and evolution, in which one comes to the same point again and again, but on different levels, so that everything can be seen in a new light.

Walking the labyrinth with an open mind and an open heart leads to healing, blessing, clarity, and balance as you engage in this embodied form of prayer. Many people can walk the labyrinth at the same time, but as a courtesy, allow a little space to develop between yourself and others. Shoes are optional. If the person ahead of you stops on the path, you may walk around them or pause, as you chose. How you respond to interruptions and others on the path may become an illuminating aspect of your walk. Most of all, enjoy this time of quiet and peace, and know that there is no such thing as “doing it right.”

History of the Labyrinth

Labyrinths have existed for more than 3,500 years and have been used in many different religious ways by many peoples. The Geneva Terrace Labyrinth is a modified seven circuit Chartres’ style, found in the Chartres Cathedral in France and dating to 1225 A.D. The oldest existing Christian Labyrinth is likely located in the fourth-century basilica of Reparatus, Orleansville, Algeria. The Christian Labyrinth, a path of seven circles, is cruciform (shaped like a cross). The use of labyrinths flourished in Europe throughout the 11th and 12th centuries and beyond, especially in the French cathedrals of Chartres, Sens, Poiniers, Bayeux, Amiens, and Rheims and in the Italian cathedrals of Lucea and San Maria-di-Trastavera in Rome. Unable to fulfill their desire to make a pilgrimage to Jerusalem, medieval Christians used these labyrinths, formed of stone and laid in the floor of the nave of some of the great Gothic cathedrals, as a substitute for a journey to Jerusalem. The Spirit Walk Labyrinth is a Cretan, or classical, labyrinth of an ancient design found on Cretan coins in various parts of the world. This classical labyrinth, constructed with stone borders and a stone path, has a Celtic cross as the starting point. Some who walk it choose to spend additional time in the quadrants of the cross as they pass or as they come to the center.