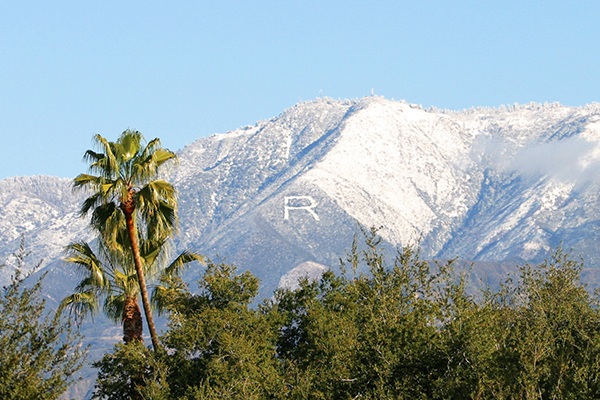 Some fifteen miles away, upon the mountain side, is an “R”.  In1913 several loyal students of the University of Redlands conceived an idea and started work on the largest college emblem in the world. As the undertaking was too great for these few, the entire student body rallied to their side, while the faculty permitted the young men of the institution to absent themselves from recitations for three days and thus complete the work for clearing the brush away. ( Taken from the forward of the 1915 University of Redlands annual).

The "R" is part of our alma mater, "…That dear old U of R, whose emblem shines afar…" and our yearbook "La Letra," meaning "the letter," is named after it.

The "R," located on a hillside of the San Bernardino Mountains, is believed to be one of the largest collegiate letters in the nation, standing 415 feet tall and 275 feet wide.

For many years, freshmen were "required" by the seniors to clear the overgrown brush around the "R." It was then lit for Homecoming with highway flares-a display, viewed from Ad Hill, that many alumni still talk about and remember fondly.

During the ‘60s and ‘70s the "R" was neglected, and the outline was barely visible. But, in 1984, more than 70 years after the first group of freshmen made their trek up the hill, freshman Greg Horn '87, spearheaded a massive effort to restore the "R" to its original glory. After 21 treks, he finished his task just before graduation.

Today, our alumni, students, employees, and friends make the annual maintenance trek as the "R" has become one of the University's greatest traditions.