Yours for the making

This artist and design student is leaving a colorful mark on the University—literally.

Students leave their marks on the University in many ways—in campus culture, in the hearts of friends, in the minds of professors—but Landon Duarte ’17 of La Quinta has left a more physical mark.

After winning a contest to redesign the campus home of Thurber, the University's bulldog mascot, Landon and some other students designed a dog house that resembles the Chapel and then painted a mural behind it that evokes the thickly wooded Redlands campus.

"As a freshman I joked around saying, 'One day I’m going to get my name on one of these buildings,'" he says. "This project gave me the opportunity to literally leave my mark on this campus—a far-fetched dream come true."

After he caught administrators' eyes, they commissioned him to make art for numerous other projects, such as the new student orientation booklet, a collection of notebooks that were given to alumni as gifts, artwork for a donor gift and numerous posters and fliers.

Landon's skills have also been put to use as the director of digital media for the student government and the layout designer for the La Letra yearbook.

His artwork keeps him busy, but when Landon first came to the University, he got involved in performance. He joined the campus' musical theater company and did some choreography for a production led by Marilyn Magness Carroll, the executive director of creative entertainment for Disney Parks and Resorts. 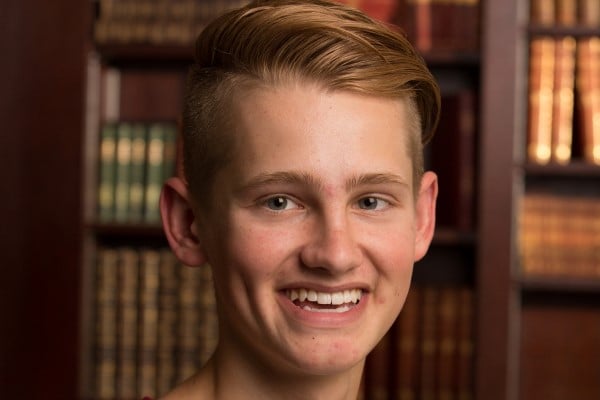 After the performance, Landon was fully committed to community involvement. "I feel like I’m getting two educations for the price of one—the first being my primary education of classes and traditional academics and the second being what I learn from my involvement in clubs, student government, internships," he says. "My classroom education gives me the tools to succeed, and all the activities give me the experience to succeed."

Landon made up his mind that Redlands was where he belonged since he took his first tour of the campus. "I fell in love right away, it just sort of felt like home," he says. "I didn't apply to any other campus. I knew Redlands was the home for me."

"I didn't apply to any other campus. I knew Redlands was the home for me."—Landon Duarte ’17