As a member of the Native American Student Union, Navarro is playing a hand in shaping campus culture.

Quinn Navarro ’18 of Big Bear, Calif. is a religious studies and pre-med student, but when he's not studying, he's working with the Native American Student Union to plan the powwow, the union's big annual event.

He lives in Anderson Hall where he works as a community assistant, which is a student that oversees activities in the residence halls. Quinn uses the opportunity to connect with students and—he hopes—strengthen their bonds with one another.

"A lot of people think the job can be a little difficult, being that you have to somewhat be a buzzkill for people or essentially stop them from having fun," he says, "but really you're just creating more ways to have fun and make sure that the community is there and everybody's being welcomed."

Quinn leads in other ways by serving as President of the Chemistry Club and Vice President of Mortar Board, a national honor society that recognizes college seniors for excellence in scholarship, leadership and service. 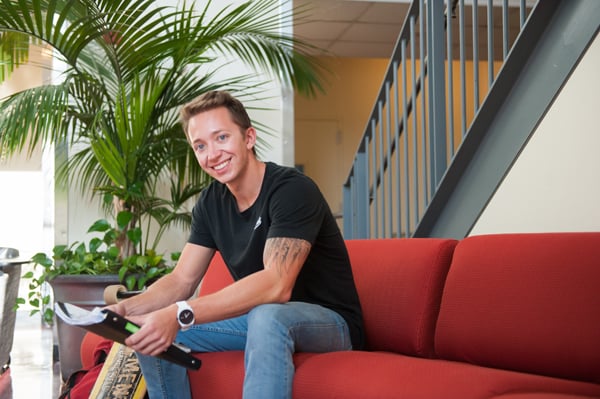 Being welcoming is one of Redlands' strong points, he says. "The campus is small and also very tightly knit. This makes meeting people easy, and almost everyone knows each other," he says. "There is always something fun to do and people to do it with."

He even feels close to his professors, which not a lot of people can say. "I know almost all of my professors on a first-name basis," he says. "I have friends who go to schools where they have 300-400 students in a class and they don't even know their professors."

As if that's not enough to keep a guy busy, he also volunteers weekly at the Loma Linda Children's Hospital, serves as a tour guide for the I'm Going To College program and acts as a mentor for the STEP program.

"I know almost all of my professors on a first-name basis. I have friends who go to schools where they have 300-400 students in a class and they don't even know their professors."