Meeting My Valentine at SFTS

David Leeb started SFTS in 88-89, right out of college. I arrived in 90-91, some 20 years out of college. My first marriage had ended five years earlier. Two of my four daughters were grown; the youngest two remained in Reno with their father, finishing middle school and high school. I chose an apartment at LeConte, in Berkeley, where Cindy Harvey was living at the time.

In October, Cindy invited me to a party celebrating the first anniversary of her 30th birthday. The actual 30th birthday party had been interrupted when Cindy was caught on the Bay Bridge the day it collapsed from the Loma Prieta earthquake. That evening, I met David Leeb, who was on his internship year. Because of the 20-year difference in our ages, we did not become an instant “romantic item.” Instead, because of common interests and values, we developed a solid friendship. LeConte was a tight-knit community, with parties and dinners, often in my apartment. If David was flying home from the Oakland airport, he sometimes spent the night in the room my daughters used when they stayed with me over their school holidays. Some of our friends confessed later that they saw the relationship beginning to blossom before we were aware of it ourselves.

In October of 1991, David’s senior year and my middle year, we watched from the roof of LeConte as the Oakland Hills firestorm came closer and closer to the Berkeley campus. I was in a house fire as a child, making this very stressful for me. I drove home to my condominium in Reno that weekend, to be with my daughters and to teach a class on the Reformed Tradition at the Nevada Correctional facility for women in Carson City. On the way to that event, I was stopped by police for a time, in a line of traffic, until a range fire near the highway was brought under control. When I returned that evening, my condo had been broken into. Once back at campus, I stopped at Oxtoby to say hello to David and his roommate Tim. They encouraged me to spend the night on their couch, so I wouldn’t be alone in my apartment after that series of frightening events. During that visit, David and Scott Mason were planning to attend an upcoming Grateful Dead Concert at the Oakland Coliseum; David invited me to join them. We did not identify it as a “date” initially, but by the end of the evening, we could no longer avoid what had developed between us. We had still not acted on those feelings however, or even openly acknowledged them.

The following week, David’s best friend Jen Butler was driving the van that circulated between the San Anselmo campus and the PSR campus. David came along and stopped off at my apartment to give me a pomegranate and a Hebrew love poem from the Song of Songs, counting on my Hebrew skills to be good enough to read it but slow enough for him to make his getaway before I did. He telephoned when he returned to his apartment, and we finally acknowledged the nature of the relationship that had been building between us.

On the 8th of February, while I was cooking spareribs and sauerkraut for our dinner, David and Jen went to the mall to purchase the lovely ring he surprised me with that night. We were both taking Reformed Worship from Howard Rice, and our final assignment was to write our wedding ceremony, which Howard and Cindy jointly performed in Stuart Chapel. The Seminary had struggled with a divisive issue that Spring, so we sent an individual invitation to every student, faculty member, and staff person, and the chapel was overflowing. Wil Russell dedicated the Seminary Singers’ Spring Concert to us, and the Singers - including David and me - sang at the wedding. The day we visited Rob and Do Martin and shared the news of our engagement, Rob had offered to barbecue a pig for our reception, so after the ceremony, guests gathered at the Air Castle for a pig roast and pot luck. The Grateful Dead teddy bears encircled the wedding cake. 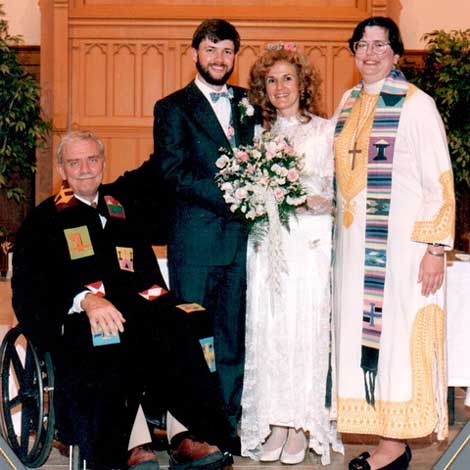 We had a quick two-night getaway before we returned to campus for final exams. For our actual honeymoon we camped across the country to Milwaukee, where David was a seminary assistant at General Assembly. We cherish the memory of a lovely picnic on the shores of Lake Michigan with Nancy and Howard Rice, as well as Scott Mason and others. Not many people are able to share their honeymoon with some of the people who influenced their relationship along the way.

In 1995, I gave birth to twin daughters, both now finished with college and beginning their own lives. On May 16, we will celebrate 29 years of marriage. San Francisco Theological Seminary, in so many ways, was the foundation on which that relationship was built.

Thanks for a chance to remember,
Carolyn '93 and David '92 Leeb