"Learn, reconnect, and discover the latest advances in GIS technology when the Esri User Conference returns to San Diego. Join thousands of users from around the globe and get a front-row seat for a look at the future of GIS capabilities." - Esri

How to Attend the Esri User Conference

To attend the conference events, you must be registered.

Register for free digital access to the UC (University of Redlands Students, Faculty, and Staff, Only)

Students! Register for a free one-day pass or pay the special University Student rate for the entire UC ($125).

Faculty and Staff: Register for the in-person UC and/or the Education Summit.

Note that full complimentary passes for the in-person UC and Education Summit events are limited to faculty and staff.

Note the vaccination requirements for the events: https://www.esri.com/en-us/about/events/uc/plan/health-safety. 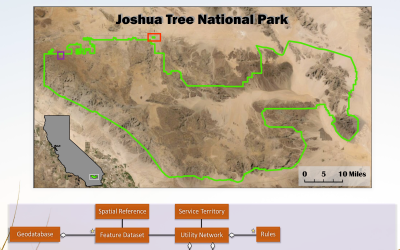 The Travels of Robinson Crusoe 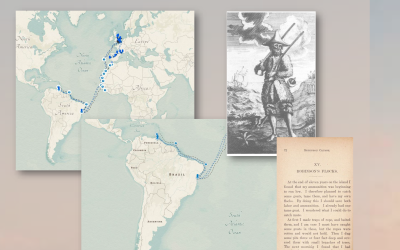 There has been a significant effort made in the STEM and Humanities to find ways to integrate both disciplines into classroom environments. By combining visual elements to novels, a solid base surrounding the spatial context can be reached or understood, which helps enrich the literary material and provide a unique learning experience. Currently, there is no widely available interactive map depicting Robinson Crusoe by Daniel Defoe that allow student notes to be added. This project is intended for Dr. Heather King, a professor and chair of the English Department at the University of Redlands. The MIP focuses on mapping the novel by taking locations mentioned in the novel and converting them into points on a map presented in a web mapping application and story map. The visual representation allowed students to look at the novel spatially and add notes, which gave them the ability to better ground the novel historically and interact with that information. 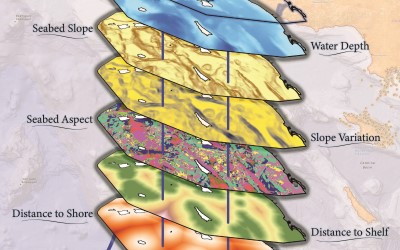 Mapping Marine Mammals: A Toolkit for the Southern California Bight

Globally, marine mammals are impacted by numerous threats, in the Southern California Bight, many of these impacts are amplified by intense development within the coastal watershed and offshore resource area. Dr. Lei Lani Stelle, a biology professor at the University of Redlands, was looking for a way to model cetacean habitat use in the Bight. Her ultimate goals were to 1) quickly and easily build predictive models and 2) enable undergraduate students to engage in species distribution modeling.

Determining a Habitat Signature for the Eastern Black Rail 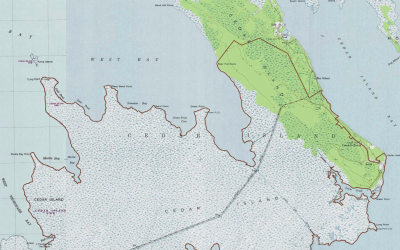 As a newly-declared threatened species, the eastern black rail is suffering from staggering drops in population. Its secretive tendencies make it difficult to spot, and its habitat profile is only loosely defined. This project aims to obtain a habitat signature for the eastern black rail using geomorphon analysis so that conservation efforts for the threatened species can be well informed. 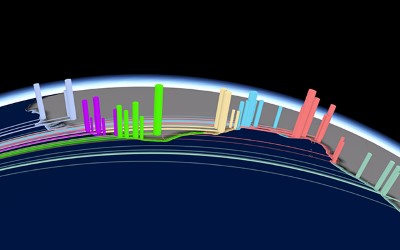 This projects’ intended purpose is to serve as a method for descendants of displaced people, as a result of the Trans-Atlantic Slave Trade, in finding their families’ spatial and historic origins. It is intended that the user would have pieces of contextual information related to their ancestor’s experience. The project provides clarity in location through using immobile entries such as African ports, regions, and destinations. By using which are not mobile, the ability to discern location is significantly increased. This project is organized to simplify the search by orienting the data around a destination so as to make it easier to identify origin. 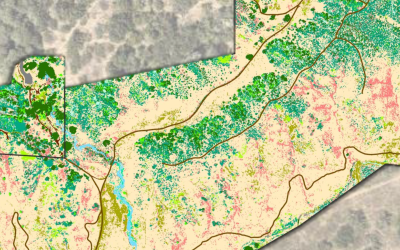 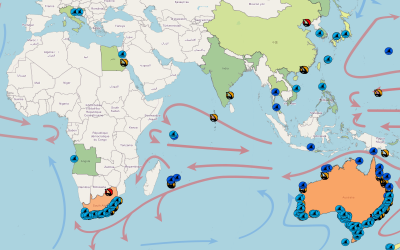 Our oceans are constantly changing due to natural and human causes and one way we can observe these changes is by studying shark movements. At the moment, their behavior and migratory patterns have not been fully reviewed to provide one concrete conclusion. Thus, by plotting shark incidents on a map we can get a sense of various patterns based on seasonal changes and ocean currents. The goals of this project was to 1) Create a shark incident geodatabase to analyze patterns and trends of the top 4 species with the highest rates recorded and 2) Display this information on a dashboard and StoryMap to act as an educational tool for the general public. 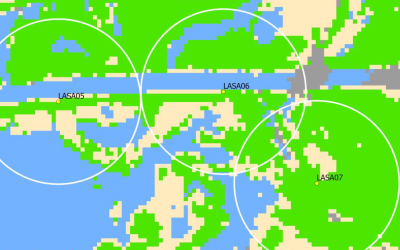 Birds provide many ecological services including seed and nutrient dispersal, scavengers/decomposers, and prey/predator dynamics. Marsh bird populations have declined due to degenerative practices such as: land development, invasive species introduction and pollution. The National Audubon Society seeks to measure the health of wetlands to better inform restoration ecologists on at-risk Marsh bird habitat. Previous work used drone imagery to calculate wetland composition, or interspersion. High interspersion rates can indicate a healthy marsh that is composed of 50% water and 50% vegetation. Drone imagery collection for more than 300 survey sites is time consuming and not feasible at this moment. Audubon wanted to explore the use of satellite imagery to calculate interspersion. Can Satellite Imagery be used to derive equivalent results as drone data? 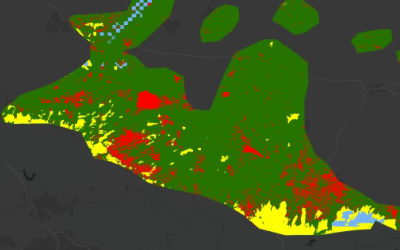 Though the Yucca brevifolia (commonly known as the Western Joshua Tree) is a resilient species, it is predicted to face extinction by 2100 in the absence of human intervention. In response, the Center for Biological Diversity put forth a petition to the California Department of Fish and Wildlife that would list the Yucca brevifolia as a threatened species under the California Endangered Species Act. This necessitated illustration of the spread of wildfires, renewable energy project applications, and urban development to the species over the last twenty years. In utilizing satellite imagery, land cover data, automation, and supervised image classification to satisfy this requirement, the results of the work performed here, which show a clear and significant rise in each realm of endangerment, are intended to serve as evidence in the deliberation of this case. Thus, the results of this project serve to aid in the salvation of the beloved Crown Jewel of the Mojave Desert. 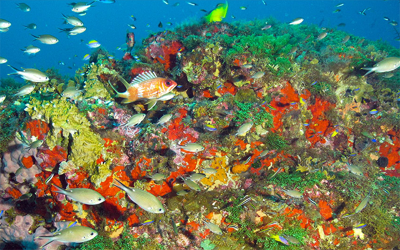 The Flower Garden Banks National Marine Sanctuary (FGBNMS) is one of fourteen National Marine Sanctuaries protected by the National Oceanic and Atmospheric Administration (NOAA). The FGBNMS is 80 to 125 miles off the coasts of Texas and Louisiana and conducts monitoring programs tailored to the information needs of the sanctuary. These programs target a wide array of topics involving natural processes, human influences on water, habitat, living resources, and maritime archaeological resources. However, past monitoring programs have been conducted where no research has been able to be obtained because of unsafe or underlying ocean conditions. An ArcGIS Dashboard will be created to solve the current maritime transportation problem the FGBNMS team is facing with monitoring programs. This Dashboard displays near real-time ocean conditions -currents, wave height, wind, temperature, salinity, and turbidity- to determine if a monitoring program can be conducted. 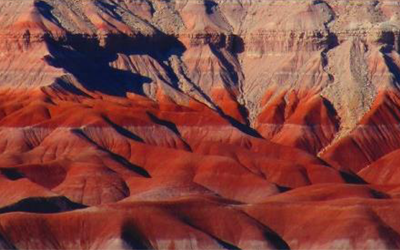 The Hopi Nation have called the Four Corners region in the southwestern United States home for hundreds of years. The Hopi currently hold sovereignty to 1.5 million acres in Northern Arizona. So far, over 5,000 cultural sites have been discovered and documented in the Four Corners region by the Hopi Cultural Preservation Office, established in 1985. This office works to track and document sites and to protect them from acts of looting and vandalism. The Hopi Cultural Preservation Office currently uses large USGS paper maps to keep track of Hopi Cultural sites. When new developments are proposed, they must sort through the hardcopy maps to find the hand-plotted sites. This process, which happens multiple times a week, is lengthy and prone to error. A web application built through ArcGIS Web AppBuilder allows the Cultural Preservation Office to search areas for cultural sites and access information on these sites. This solution speeds up the process from many minutes to just a few seconds. 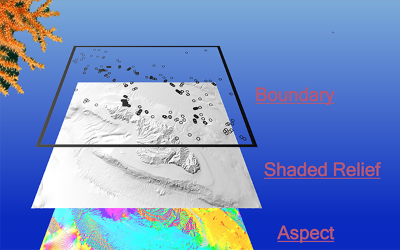 Ashlee Robinson, Mark Kumler Ph.D.
The National Oceanic and Atmospheric Administration (NOAA) Deep-Sea Research Technology Program has been collecting coral and sponge location data since 2007. To enhance their database, they would like to add raster values such as slope and shaded relief to the individual points. The DSRT want this analysis to be user-friendly and incorporated into an ArcGIS Learn Lesson for users to be able to complete on their own. An ArcGIS Learn Lesson will help users understand how to perform and visualize raster analyses and enhance the NOAA Deep-Sea Coral and Sponge database with the values that come from the analysis. 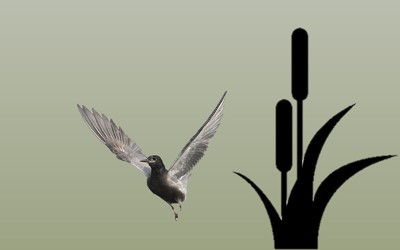 The Saint Clair Flats Wildlife Area, located on the far east side of Michigan on Lake Saint Clair, has been invaded by an invasive cattail which has dropped interspersion rates in the area. Ideal breeding conditions and interspersion rates for waterfowl are generally known and controlling this invasive cattail could lead to high reproduction of all waterfowl in the area, while specifically looking to benefit the black tern. The black tern is endangered in several states and needs high interspersed areas for preferred breeding. In order to calculate the interspersion rates for each area, each image must be classified. Class values range from 0-5 and are each a distinct ecological characteristic. First the images were enhanced using a low pass 3x3 smoothing filter. Next the images were classified using the classification wizard in ArcGIS Pro. A Python script was written to read each classified image and calculate interspersion using an interspersion and juxtaposition index (IJI) equation from the U.S. Forest Service. 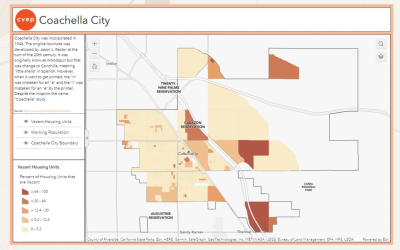 This is an economic dashboard and series of web maps designed to assist the Coachella Valley Economic Partnership in creating a centralized location for showcasing census data about the Coachella Valley. The goal of this web solution is to provide this centralized location as a service to local government agencies as well as to use the dashboard to showcase the data to businesses looking to relocate to the valley. 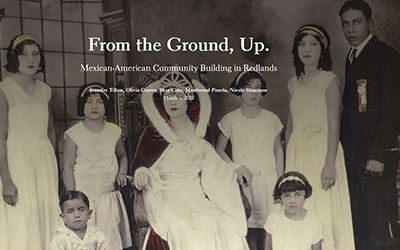 From the Ground Up: Mexican American Redlands – Jennifer Tilton

This StoryMap documents the growth of Mexican-American community in Redlands in the first half of the 20th century. It highlights the stories of Mexican American families, churches and businesses and the growth of communities on the northside of Redlands from the 1890s through the 1940s. 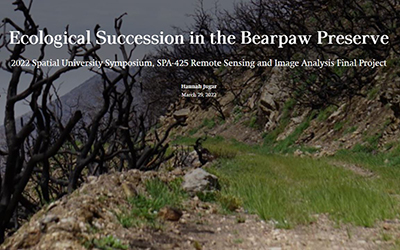 The El Dorado Fire began on September 5, 2020 in Yucaipa, California. A fire broke out after a gender reveal party mishap that set the nearby brush ablaze. The fire spread eastwards to the Bearpaw Preserve in the San Bernardino National Forest. The fire continued to burn for nearly two months and reached full containment in mid-November 2020. Over twenty-two thousand acres of land was burned leading to the displacement of wildlife. 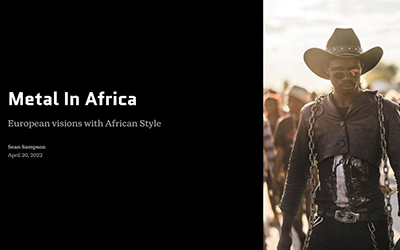 There's no question that the 1960s changed the music world forever. It was a time of genre-bending experimentation that carved the path to the seemingly infinite types of music today. Bands like The Beatles and The Rolling Stones built upon their blues predecessors. A counterculture was born out of an anti-establishment mentality, civil rights movements, and psychedelics. Rock and roll transitioned from a genre you could listen to with your parents to something they questioned the morality of. The music grew louder and more rebellious with each year. By the end of the '60s, rock artists such as Jimi Hendrix, Led Zeppelin, and Black Sabbath had already sowed the seeds of "heavy rock" that would quickly sprout into what is now known as metal. 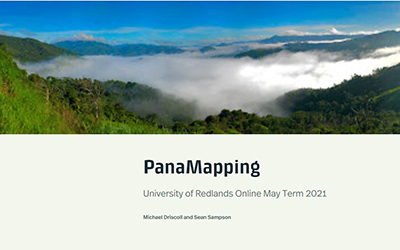 Located in the Isthmus of Panama, the Mamoní Valley Preserve sits in one of the few biodiversity hotspots of the world. At 121 square kilometers in area, the preserve is situated in the narrowest part of the North and South American connection.

Due to its unique location and ecological importance, the Mamoní Valley has been determined to be a priority for conservation. Protecting this region helps to widen the Mesoamerican Biological Corridor, allowing the countless different species that live there to flourish. The valley is home to a variety of wildcats, monkeys, reptiles, and amphibians, as well as the tropical forest that provides their shelter. It is also home to the indigenous people of Guna Yala. 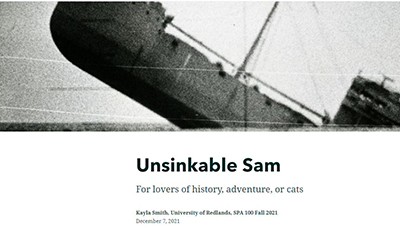 Unsinkable Sam, also known as Oscar (or Oskar) started his “career” in the Nazi Navy, Kriegsmarine, and ended it in the Royal Navy. He survived the sinking of the Bismarck, the HMS Cossack, and the HMS Ark Royal and then lived a quiet life catching mice at a home for retired sailors in Belfast, Northern Ireland.