As music composition students at the University of Redlands, Jamison Stevens ’22 and Timothy Cunningham ’22 have spent the last four years learning about different facets of the craft—from stylistic and technical tasks such as forming melodies, harmonies, and chord progressions to creating sheet music and engaging in the music production process. Last spring, when it was announced that Krista Newkirk would be the University’s 12th president, the pair began to think about writing a piece of music to mark the occasion.

“No one asked us to do it; we just decided ourselves,” says Stevens, who previously collaborated with Cunningham on the Feast of Lights masterwork in 2019. “I figured: Why not? We have experience.”

Director of Choral Studies Nicholle Andrews says this display of initiative and creativity is typical of the pair. “When Jamison and Timothy first asked for my thoughts on writing a piece for President Newkirk, I was not surprised,” she says. “As composers, their music allows them a platform to share their thoughts and ideas with the world. They write from the heart, and [this composition] is a beautiful example of their esteem and respect for our institution and, more importantly, for their learning experience.”

Over the summer, Stevens and Cunningham composed “12 and Change,” a song that was performed by the Chapel Singers during the first in-person choral concert that the School of Music hosted since the onset the COVID-19 pandemic. Stevens and Cunningham both say the composition welcomes Newkirk by celebrating an era of progress, transition, and hope. 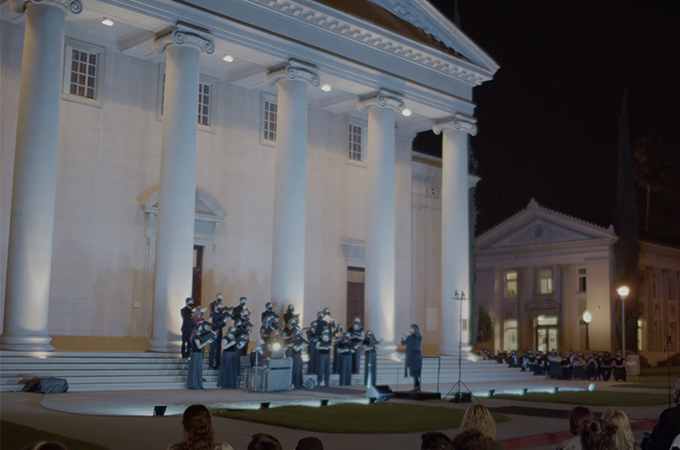 While they knew they possessed the skillset to compose the music, Stevens and Cunningham decided someone else should write the text for the piece. Ultimately, they tapped the David Boies Professor of Government, Art Svenson, who has been known to flex his writerly skills.

“We knew we wanted him to write the text because I had seen his inaugural reflection for President Kuncl,” says Stevens. “It was a really evocative text.”

Cunningham continues: “When we logged on to our first meeting, Art had already written all of the text and it was immaculate. We were both in shock.”

Svenson is equally complimentary of the pair’s work. “Jamison’s and Timothy’s score—even at first hearing for me—is gorgeous, filled with richly layered harmony and a lyricism that is original, heartfelt, genuine,” he says. “I have played that score in my head a hundred times, and it is the most satisfying of musical welcomes.”

The text is inspired by the University’s alma mater, which was written in 1914, while also incorporating some new themes. In the span of seven minutes, the lyrics stretch from “Our U of R, old and dear,” to “Our U of R, sparkling now, new and dear.”

This kind of interdisciplinary collaboration has been a highlight of Cunningham’s time at Redlands. In addition to composing pieces for the Feast of Lights and Chapel Singers, he has worked with the Theatre Arts department to score music for multiple productions and is excited by the potential opportunities that students have to work with other departments outside of their fields of study.

“During my time at the University, there has been collaboration between the Theatre Arts Department, School of Music, and Media and Visual Culture Studies Department,” he says. “I didn’t expect to be able to work with other departments like I have, and opportunities like this are becoming more frequent.”

The anatomy of a song

After receiving the text, Stevens and Cunningham began the composition process. Both say it’s easier to build a piece of music around lyrics so that the words can be prominently displayed and well-presented. The music and lyrics should relate to each other.

Unlike the masterwork of the Feast, where they each wrote separate movements that were brought together, Stevens and Cunningham knew that “12 and Change” needed to be a cohesive piece from the beginning. The writing process involved a lot of give-and-take, from considering initial ideas to implementing aspects of feedback they gave each other.

After spending the last four years working together, Stevens and Cunningham can make educated guesses about what the other is going to bring to the table. But there was still room for surprises. Cunningham, who traditionally writes slow and thoughtful music, contributed the piece’s quickest parts.

“I usually can know what [Jamison’s] going to do with the harmonies,” says Cunningham. “We’re kind of in each other’s head in that way. When we bring our ideas together, it’s easy to tell which parts are mine and which are his.”

While the COVID-19 pandemic prevented students from performing together in person, the chance to develop new skills in music production was an unforeseen benefit. Cunningham took to creating sample tracks on a digital interface—some even with four-part harmonies—that helped him and Stevens preview the piece. Cunningham says he now feels more comfortable working in that technological capacity with other musicians and recently helped to produce a friend’s album.

The importance of collaboration and building strong relationships with other musicians has been a theme of both students’ careers at Redlands. A hallmark of these relationships is the ability to give and receive constructive feedback in order to enhance a piece of music or performance.

“You have to learn how to separate yourself from your music,” says Stevens. “Even though you’re putting your heart and soul into this, it’s not your actual heart. You have to take a step back and look at it from a broader perspective.”

Cunningham agrees, adding: “You also have to be able to critique yourself without becoming attached to what you’ve already made.”

After a year and a half of the COVID-19 pandemic, Stevens and Cunningham savored the experience of performing for the first time in person. Both are a part of the Chapel Singers ensemble, which premiered “12 and Change” on the steps of the Memorial Chapel on November 5.

“The most rewarding thing about composing is being able to hear your pieces performed,” says Stevens. “Having the chance to actually hear it, not in your head or out of a computer, is such an experience.”

For Cunningham, a highlight is watching musicians connect to the piece that they’re playing or singing. Being a part of the ensemble himself, he gets to shift perspectives from composer to performer, which he says are very different.

As fourth-year students, Stevens and Cunningham view “12 and Change” as a small parting gift to Newkirk and the larger University community. Both plan to pursue graduate studies and subsequent careers in the music and performing arts fields. The experiences they have had at the University of Redlands lay a strong foundation for their futures.

“It’s not uncommon for this to happen here,” says Stevens, referring to the opportunity to chase his interests in the company of supportive students and faculty members. “At other schools, undergraduate composers might not be prioritized. Redlands really values its undergraduate students, and that experience for a young composer is life-changing. It enhances our portfolios and makes it easy to move into a professional career. There are lots of opportunities for composers, performers, and educators here.”