Since the annual University of Redlands Feast of Lights was conceived in 1947, this musical portrait of the birth of Christ has been renowned for its artistry— the music, the costumes, the tableaux, the candlelight — as well as for its hopeful, joyous spirit. This year’s performance is even more exceptional, as the composers of the show’s musical centerpiece are U of R music composition majors Jamison Stevens ’22 and Timothy Cunningham ’22.

A handful of students have written music for the Feast of Lights before, but Stevens and Cunningham, who are also members of U of R’s Chapel Singers, are the first ever to have composed the central “masterwork.” 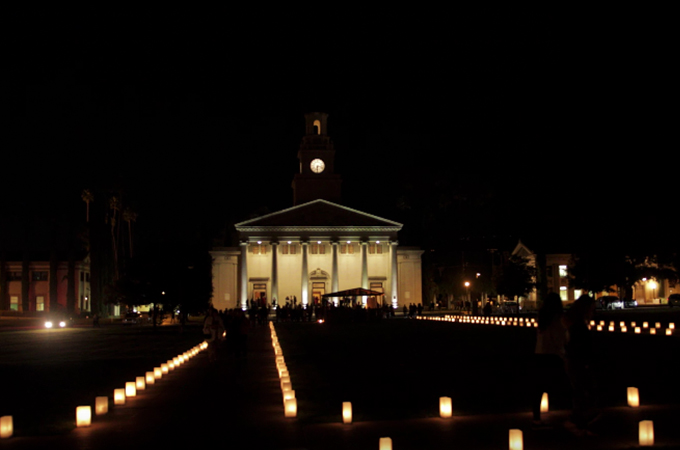 The idea came to Stevens after he witnessed his first Feast of Lights in 2018; he was so inspired he immediately went to Cunningham and suggested writing a piece for it.

Cunningham’s response? “Is that even allowed?”

When the students proposed the idea to their composition professor, Antony Suter, however, he was supportive. Suter says, “Taking on that big of a project is generally not something that would be prudent for a couple of first-year students, but I let them do it because they’re both very talented and very hardworking.”

Cunningham and Stevens began working on their composition over the 2018-19 winter break. They found that creating the music was easy: “It was such an organic experience that just sort of … happened,” Stevens says. Cunningham figured out the texts, after which the melodies and the overall sound developed quickly. “We were working separately but together throughout the whole process, which created a sense of cohesion,” Cunningham explains.

At the end of winter break, the two each had sketches of their movements. They took it to Director of Choral Studies Nicholle Andrews, saying, “We know it sounds crazy, but we have this idea for the Feast of Lights.”

Instead of saying “no” as the students expected, Andrews gave them parameters for the piece’s length and instrumentation, as well as a deadline, and said, “Show me what you’ve got and we’ll talk about it.” “My view was, ‘why not try it and see if it works?’” Andrews says. “We’re a liberal arts university, and we’re all about showcasing our students. The Feast showcases our students as performers, so why not showcase them as composers as well?”

Suter worked with the students on the orchestration with instruments and voices, and helped them move towards a final product.

The result is a 10-minute work for orchestra, choir, and youth choir entitled “Hymns of the Nativity,” made up of two movements. The text comes from two Greek Orthodox Nativity hymns, the Apolytikion and the Kontakion, and is sung in the original Greek.

The Apolytikion, a slower, meditative piece composed by Cunningham, makes up the first half. It then slowly grows into Stevens’ composition, the Kontakion, a more celebratory exclamation of hope and joy.

“They wrote a piece with the performance, tradition, the sacred and religious aspects in mind—and it was a perfect fit,” says Andrews.

Before practicing for the Feast of Lights with the Choral Singers, the two had only heard their compositions on their computers through a tinny MIDI playback of electronic voices that didn’t sound real. Cunningham says, “Hearing real people sing and play it is an unforgettable experience.”

Cunningham, who began piano lessons at age 4, was a member of the Southern California Vocal Association honor choirs in high school and took AP Music Theory, where he learned common practice composition, writing four-part, Bach-style chorals. Stevens, a piano major, had been going to summer piano camps hosted by the U of R School of Music since he was in high school.

But neither had composed anything as big as the Feast of Lights centerpiece before. “We’d never worked with a full orchestra or a full choir or anything to that extent,” Stevens says. “So it was a very big deal. Both Professor Suter and Professor Andrews have been a great encouragement throughout the whole process and we really could not have done it without them—literally,”

Cunningham recognizes the experience is professionally auspicious: “Having an orchestral and choral piece written and performed at such a high caliber is going to change our portfolios completely.”

Suter notes that composing a piece and having it performed live by major university ensembles is extremely rare in undergraduate education, but not at the University of Redlands. Suter says the University’s large ensembles, which are conducted by faculty such as Chapel Singers, U of R Orchestra, and Wind Ensemble have all performed many student works over the years.

“We have really good student composers, and my faculty colleagues recognize and honor that by performing student works regularly for major concerts,” he says. “The good things happening in the composition program right now—none of it would be possible without the collaboration and support of my colleagues across the School of Music.”

As for the future? While Stevens says his main goal is to teach music, he and Cunningham both say they want to write more orchestral and choral music for the Feast of Lights.

Stevens adds, “The Feast of Lights is such an important event for the school and the community; to give two freshmen who just finished their first semester of college permission to write the centerpiece is crazy. … We did this on a sheer whim for fun, and it took up months of our lives, but we would do it again in a heartbeat.”

Learn more about the University of Redlands School of Music or the Feast of Lights celebration, which will be held this year from Fri., Dec. 6 to Sun., Dec. 8.