In 2019, Professor of Composition Anthony Suter found the University of Redlands holiday tradition Feast of Lights illuminating in more than one way. At the celebration, he approached David Boies Endowed Professor of Government Art Svenson, saying, “I have this crazy idea; would you want to work on it with me?”

Suter wanted to produce an election-themed concert with Svenson writing and performing spoken word, an art form Svenson is known for. Although the duo worked within different disciplines, they always admired each other. “Art, to me, is part of the moral gravity of the University,” Suter says. In turn, Svenson says, “Tony is just brilliant; he’s kind and compassionate, and his music carries me away. Before he could finish asking, I already decided to join him.”

The work was always meant to touch on issues driving voters to polls in the 2020 presidential election, but, fast-forward 10 months, and the pair found issues had grown to encompass a historic pandemic, pronounced unemployment, and racial disparities.

Many of these topics and other catchphrases and pop culture references (including Tik Tok, Katy Perry, and the Talking Heads) thus appear in the product of their collaboration, a 20-minute performance titled “Can You? Will You?” It features Svenson’s spoken word accompanied by three musical movements composed by Suter. Recorded at the Memorial Chapel on Oct. 3., string trio and U of R faculty Samuel Fischer, Kira Blumberg, and Kyle Champion performed the music (socially distanced and masked), recorded by sound engineers Abigail Mellado ’21 and Jacob Quijada ’22.

Svenson’s words flow during his “Can You? Will You?” performance, but he says he wrote 14 versions of the text before he finally recorded his text for Suter to hear in June. A professional violinist himself, Svenson says he kept rhythm in mind writing the work, which he did while riding his bike. “I would stop wherever I was, get my phone out, and write ideas on my note app. Then I would sit in my office, download these ideas, and write.” 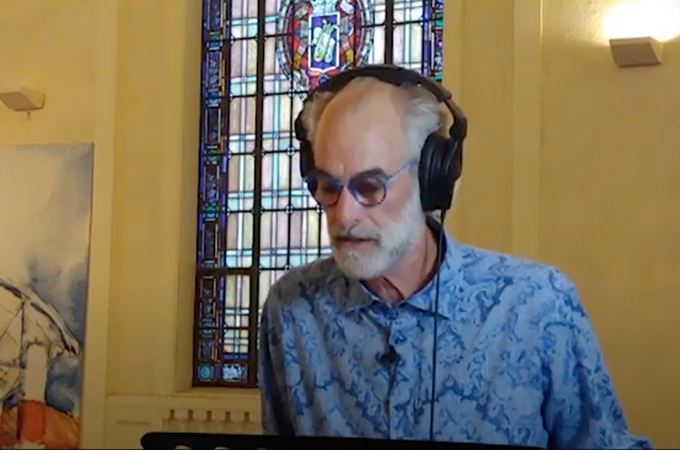 Suter then began studying Svenson’s work and vocal timing to sketch out the musical movements. “So much of composition is thinking and planning what you’re going to do,” he says. “I must have listened to that recording 100,000 times over the course of the summer.”

By the time he was free to write the piece, Suter had encountered another challenge: The University had moved to a virtual teaching model, and he had to refocus his attention on reworking his course curriculum. “In the end, I wrote 80% of the piece in 32 hours!” he says, laughing. “Luckily, I work best with a deadline looming over me.”

Trust was a big part of what made the collaboration rewarding for both professors, paving the way for a lyrical and musical conversation within the piece.

What they didn’t realize was it would also provide emotional catharsis. For Svenson, writing through the chaos of the time provided him with a call to action. “We need to step back to a place where reason prevails—we can’t just scream at each other. Let’s be reasonable again—that’s the vaccine for the sickness of our bodies and the sickness of our body politic.” In addition, the piece is dedicated to Professor of Creative Writing Ralph Angel, a dear friend of Svenson’s who passed away in January. “I’ve known him for all my years at the U of R, and [his death] was devastating. I loved him very much. And I miss him.”

Suter likes to think that someone feeling disaffected and apathetic towards participating in the voting process might be inspired to vote after watching the performance. Just as important, however, the project allowed him to create something beautiful with people he loved. “I walked into the recording session with my colleagues in the School of Music, and we had not heard or played music in a space with other human beings for seven months. And it was a moment I’ll never forget.” He adds, “It made me realize that the courageous act of making art, in a world that is broken right now, is one of the most radical things you can do.”

Although the piece was initially conceived as a live performance, there are no plans to transform the work into a bigger production. Both Suter and Svenson agree that because the performance is so particular to this time, it has a shelf life. “After Nov. 3, it’s an artifact,” Suter says. “So it exists in the temporal state, a fleeting beauty I love about it.”

Watch Suter and Svenson’s performance or learn more about studying music or political science at the University of Redlands.