by the Student Success Partnership staff

Since the start of the COVID-19 pandemic, the U of R School of Education’s Student Success Partnership (SSP) has offered most of its services virtually.

The focus of SSP, which was founded in 2008, is to provide academic support, college and career exploratory activities, and relationship building—all with the goal of helping participating foster youth succeed. “We work to broaden the possibilities of success for the foster youth we serve,” states Kelly Kwok, who co-directs SSP with Catherine Walker.

After many months online, SSP has cautiously begun to transition back to face-to-face services, including with its weekend Success Academies. Using hands-on activities, Success Academies allow participants to explore post-graduation options such as college, vocational education, and other career paths. 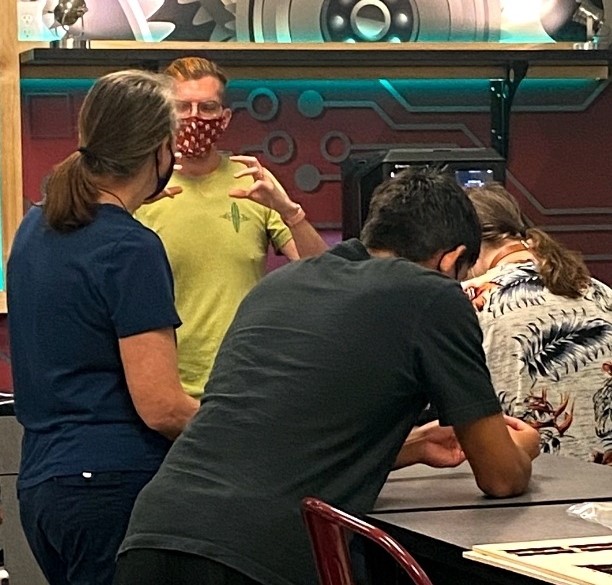 In October 2021, a group of foster youth came to the main Redlands campus for an exciting morning of curiosity-building activities. The group toured the new Makerspace, part of the Fletcher Jones Foundation Innovation Center. Computer Lab Supervisor Iyan Barrera-Sandri '08, '15, '22 showed off the room’s 3-D printers, laser cutters, virtual reality, and more, sparking ideas for different projects. Barrera-Sandri told the group that the space was a “no-fail” zone; making and re-making was encouraged.

Soon, participants progressed to programming the mBots through an object-oriented application and had their robots moving in different patterns and playing music. 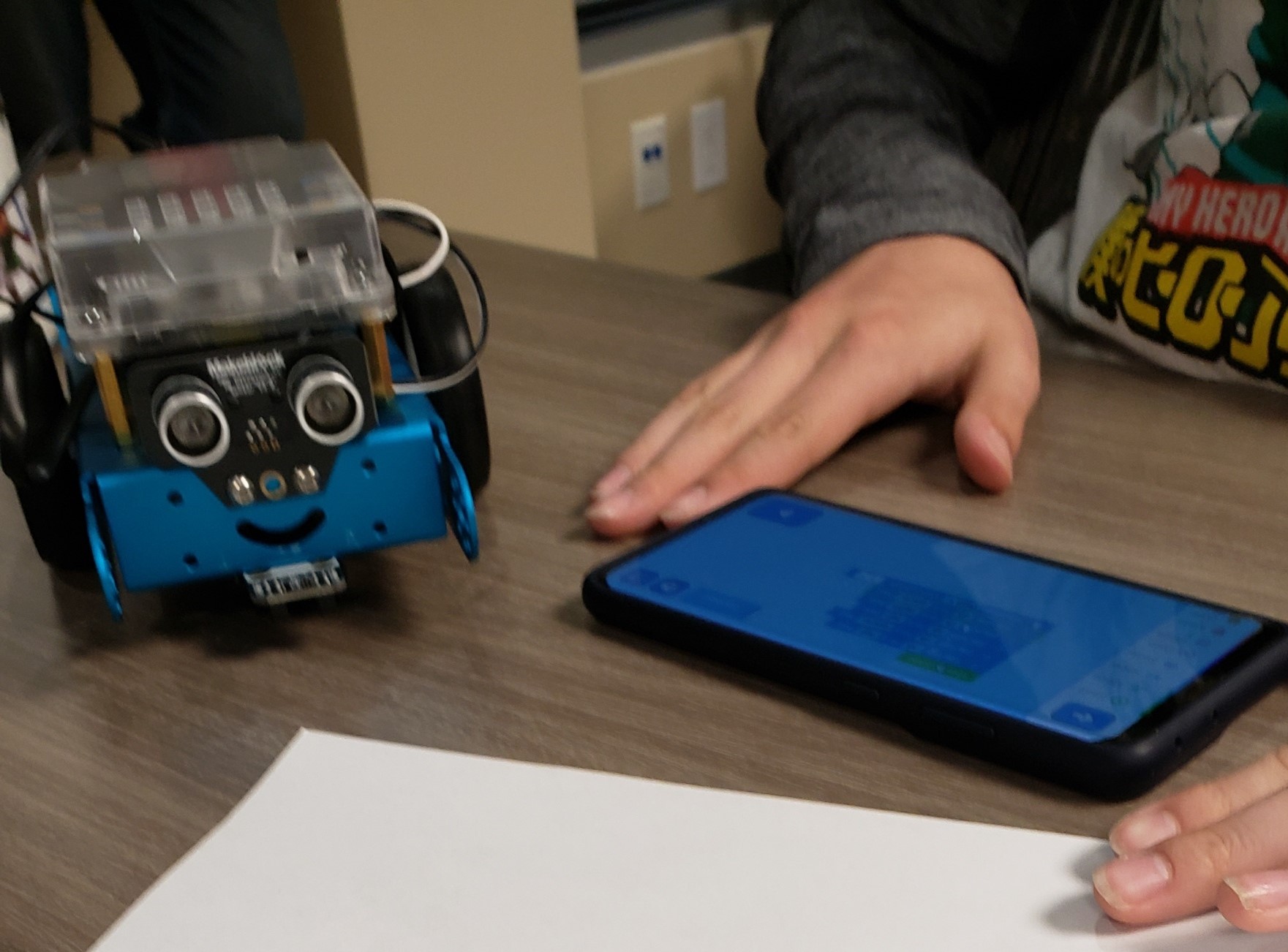 The workshop ended with the youths demonstrating what they were able to get their mBots to do. When Walker stated emphatically, “I call this workshop a success,” a participant responded, “Well, this is the Saturday Success Academy!”

With more than 100 attendees online, our virtual Expanding Horizons 2021 youth conference was a huge success.  At this conference, the attendees had the opportunity to interact with guest speakers, college representatives, and service providers.

Our 2021 conference keynote speakers: Kevon Lee, Daniel Mora, and Noel G. brought messages of perseverance and strength to our youth. 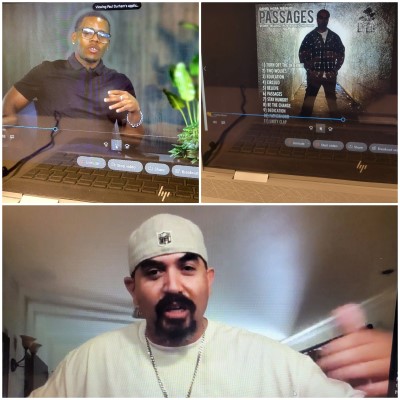 In collaboration with the School of Education at the University of Redlands, the Student Success Partnership receives funding from San Bernardino County Superintendent of Schools Foster Youth Services Coordinating Program and the San Bernardino City Unified School District.  Kelly Kwok and Catherine Walker co-direct this program.

Weekend Success Academies
Weekend Academies focus on a variety of topics including (but not limited to) academic skills, social justice, team building, art, writing, and science. During the Covid-19 pandemic, we have facilitated all our activities virtually. We offer our Academies to each group home individually so that our student/instructor ratio is kept to a minimum.

August 2020:
Title: Playing an Escape Room Game as a Skill-Building Challenge
Facilitator: Levi Deathridge
Dates: Saturday and Sunday, August 29 & 30
• In this Academy, the youth played an escape room game under the direction of Levi Deathridge. Escape room games are based on visual, spatial, and written clues. Using teamwork, the youth worked through presented scenarios/puzzles to get to the end and successfully complete the game.Audience: Starshine Treatment Center

September 2020:
Title: Art with Social Activist Duan Kellum
Facilitator: Duan Kellum
Dates: Saturday and Sunday, September 26 & 27
Audience: Starshine Treatment Center
• Duan Kellum, a teacher at Redlands East Valley High School, an artist and social activist, uses social, political and environmental issues as the basis of his artwork. What he creates is a representation of his interest in domestic and international politics and current events. In this workshop, the youth designed t-shirt and mask designs centered on the theme of positivity. Those designs were then applied to the
clothing items.

Title: Understanding Restorative Justice
Facilitators: Leah Volchok, Maya Villar Carrillo, and David Puma
Dates: Saturday, September 12 Audience: River Stones Residential Treatment Services
• For this Academy, the team focused the topic of restorative justice. With
restorative justice, the focus shifts from who is wrong and what the punishment should be, to looking at who is affected by what happened, and how they were affected. Looking at a situation from a different perspective is an essential aspect of coming to agreement about how to make things right (http://www.centerforrestorativeprocess.com). The youth were presented with a scenario; they then looked at solutions from both punitive and restorative points of view.

In October 2020, the Student Success Partnership, hired University of Redlands Choral Music major Dora Ridgeway to provide singing lessons to the Star Shine Treatment Center youth. The goal of this project was to produce four songs, one sung by each house by December 2020.

Before the first rehearsal of this project, Dora made sure she had a list of songs that would be good choices for beginners to sing. She personally believes in letting students have some choice over what they perform, but also wanted them to be able to think of how certain songs might be received.

The theme for the song choices was joyful and playful. A few suggestions were made, and Dora gave them her list; ultimately, each house decided on a song they all liked which met the theme. For example, one young man suggested a love song, but when it was placed it in the context of the theme, everyone decided to choose another song. This
did take longer than simply choosing, but, in the end, everyone felt more inclined to participate because they enjoyed the songs they selected together.

During rehearsals, Dora started with a listen-through for the first time. Some boys knew their song selection completely, some only knew certain sections, so this was a good way to get everyone on the same page. Once they had a general idea, she then broke up each song into sections, working on only a short section during each rehearsal, and then
building upon that each rehearsal after.

With each section technically learned, the groups starting working on some introductory techniques like shaping vowels to increase resonance and improve tone, taking good breaths to help sustain notes, and listening to and collaborating with the other people in their ensembles.

At the last rehearsal for each group, the houses recorded for the final product. Each singer had his own laptop and headphones, and they passed along an audio recorder. The youth quickly learned how to use the audio recorder, how far to hold it, and how to listen back to a recording. Then, each youth recorded his voice one by one. They listened to the song
in their headphones, and then sang, creating a track with only their voice, but still lined up to help with post-production. There were some takes that did need to be re-recorded, but overall, Dora was very pleased with the quality, and the willingness to participate.

Post-production work consisted mostly of fine-tuning each participant’s recordings in GarageBand. The biggest challenge musicians, even college-level ones, have with recording in this virtual setting is rhythmic discrepancies. To fix these and make it sound as though they had all sung together, Dora listened to one track at a time as she cut and moved a few parts to match the example vocals. She then made sure to line up each track in the exact same way.

This process results in a “together” coordinated choral sound. In some cases where notes stood out extremely, Dora would slightly pitch up or down some of the voices, just to make sure everyone was in tune. After Dora had every track lined up and tuned the way she wanted, she found a royalty-free karaoke track to put their voices on top of, and the audio was finished. To complete each project, Dora created a video with each audio and a picture relating to the songs in iMovie and posted them to a private YouTube for the final performance. For several years now, the Student Success Partnership and the Foster Youth Services Coordinating Program of the San Bernardino County Superintendent of Schools have co-hosted the WellnessSummit conference. In 2021, not even a pandemic could not stop this important event. This year, though, we gathered virtually on January 29, 2021.

The Wellness Summit is designed to uplift, motivate, and inspire those who work tirelessly for the health and welfare of our at promise youth. The attendees, including social workers, counselors, probation officers, and other youth advocates, are connected through the work they do to benefit young people.

As part of this year’s virtual conference, four Starshine Treatment Center foster youth, wrote and performed their own words of inspiration. Catherine Walker, Co-Director of the Partnership, ran virtual coaching sessions for the youth. Joining in on those sessions were a professional public speaker, an artist, and a writing instructor; they all worked together with
the youth to help them finish their pieces.

In summary: Brandon’s work, “The Grind,” encourages other young people to make good choices, while Andrew’s work, “A Shout-Out to Frontline Workers,” recognizes the struggles faced during the pandemic. Zuria’s expressive words compares life to a pomegranate, reminding us all that life experiences can harden our outer shells (much like a pomegranate).
Lastly, Miguel wrote about being alone versus lonely and reminds people that much can be accomplished, even by one person.

While there will be a definite focus on college preparation, the Senior Seminar will also look at preparing for the job market. During the program, the youth will explore different career options, learn about applying for scholarships, and gain an understanding of the different
financial aid packages, such as grants, loans, and work study. Additionally, the youth will learn how to apply for a job and will participate in a mock job interview.

Our program outcomes include:
• Researching career options related to their own interests.
• Understanding scholarship essay requirements by critiquing other essays.
• Writing a brief scholarship essay.
• Creating a resume.
• Completing a job application.
• Participating in a mock job interview.
• Learning how to open a checking account and a savings account.
• Understanding of the nature of completing work for compensation.

The Senior Seminar program is incentive-based. Students will earn “Brain Bucks” for both participation and the completion of assignments. At the end of the program, each participant will be able to spend his accumulated Brain Bucks at Amazon. We anticipate that each youth will have an opportunity to earn approximately $75.00 in Brain Bucks by participating fully and completing all assignments. We have a total of eight participants in our Senior Seminar spanning both the Starshine Treatment Center and River Stones Residential Treatment Services.