Registration, which is free, permits us to send updates, reminders, and the meeting link for virtual attendees.

This project addresses the problem of a lack of consistent testing for SARS-CoV-2 for vulnerable populations in disadvantaged areas. The proposed solution is to use a wastewater-based epidemiology approach to detect SARS-CoV-2 in small communities, rural areas, and compartmentalized populations. This will allow a study of community infection dynamics and allow focus on low-income areas that have inefficient disease monitoring systems. This study collects GIS site information of all wastewater treatment plants and other monitoring programs across the United States. Those sites are shown on a map that is compared against the US CDC’s Social Vulnerability Index to visualize the coverage of wastewater-based surveillance distribution nationwide and at the state level. Our hypothesis is that this type of surveillance is uniquely positioned in affluent communities and may not yet provide important surveillance data for disadvantaged areas.

The deep-sea is one of the largest habitats in the world. Homing to coral and sponges that make up most of the benthic habitat to an assortment of aquatic life, and their survival is critical for ocean biology. Under the National Oceanic and Atmospheric Administration (NOAA), the Deep-Sea Research Technology Program produces databases for an assortment of species but focuses mainly on coral and sponges. Their main database is a hub for images and data, but these data are cluttered, and users have difficulty accessing information. The focus of this project is to help users understand the database more clearly. A GIS could aid this problem by allowing users to follow a step-by-step lesson on how to download the deep-sea data and produce their own species dashboard for a location of choice from the downloaded data. To reach a wider audience in conserving the coral and sponge species, an ArcGIS Learn Lesson will help users understand the new database and dashboard application. This database will be published on the NOAA ArcGIS Online portal and a direct link to the ArcGIS Learn Lesson.

GIS is increasingly applied in business for multiple purposes such as marketing, site selection, transportation optimization, supply chain geographic flows, locational positioning, emergency location information coordination. Accordingly, the GIS leader in a firm needs to develop a strategic plan with prioritized objectives. A case study analysis was conducted to answer five research questions: what is of high priority in GIS strategy; extent that competitive features are included in GIS strategy; how is spatial strategy positioned relative to business and IS strategies; extent that GIS strategy is included in business strategy, and how does spatial strategy differ by size of the organization? The answers are explored in case studies of three businesses. Findings show differences between businesses in the high priority strategic objectives, variation in strategic plan recognition of GIS as a competitive force and in GIS’s mention in the corporate plan, and differences in spatial strategic planning by company size.

PanaMapping: The University of Redlands Does GIS in the Jungle. Dr. Daniel Klooster, Environmental Studies Department

A University of Redlands travel course to Panama, nicknamed “GIS in the Jungle,” tasks students with activities such as trail mapping, gathering original data with unmanned aerial vehicles (UAV), landcover mapping of pastures and forests, and visualizing the distribution of above-ground forest carbon content. These GIS activities help students construct an understanding of rainforest conservation that integrates their experiences living, hiking, and collecting original data in that environment. UAV and GIS also provided a platform for interacting with local conservation organizations and with indigenous peoples struggling to defend their rainforest territory from colonist deforestation. Students use GIS and UAV to integrate their direct experience with ground-level fieldwork in the rainforest with a birds-eye view of the interlocking ecosystems and human impacts. Combined with direct rainforest experiences, GIS projects help students develop an understanding of nature’s interlocking systems and the social context of rainforest destruction and conservation.

Research from the 2021 May Term focuses on The Mamoní Valley Preserve, a non-profit conservancy in Central Panama that includes 5,000-hectares of rainforest in one of the remaining 25 Biodiversity Hotspots, the Tumbes-Chocó-Magdalena eco-region. Their goal is to restore this highly degraded yet biologically significant region while reversing the impacts of climate change and human activities threatening severe biodiversity loss.

Since travel courses were canceled last year, a virtual course was offered as an alternative to continue the work. Research is ongoing and will continue this May when students are given the opportunity to return to Panama, presenters included.

The team, supported by Professor Allison Fraigberg, traveled to and consulted in Trieste, Italy this past January 2022. These 5 MBA students met with and ultimately advised a family-owned winery in the heart of the Friuli Venezia Giulia wine region.

This StoryMap chronicles their journey. From pre-engagement classroom learning and preparation to the challenges of travel in the time of COVD, through the excitement of the live consulting week, and culminating in the weighty responsibility of researching, and ultimately advising a real company. This is the story of how 5 students became a dynamic team. And while they will each tell you that the global consultancy is the hardest class in the MBA program, it was also the most impactful personally and professionally.

A global effort to combat climate change was championed in December 2015, when Parties to the United Nations Framework Convention on Climate Change (UNFCC) signed the Paris Agreement. Undergraduate students studying environmental science at the University of Redlands lamented the 45th President of the U.S. decision to withdraw from the Paris Accord. In an effort to instill a resilient mindset, an experiential course was created to investigate and develop a framework centered around how communities in the United States think globally and act locally about climate change. Ten students enrolled in the Resilient Cities: Planning for Climate Change seminar that launched an experiential educational endeavor to assess economic, environmental, and social vulnerabilities as a result of climate change. Students considered local planning efforts through community-scale climate action or adaption plans, economic, environmental, and social capital benefits and threats in the initial phase of discovery. Through further distillation of issues, students critically constructed economic topics such as diversified income streams and livelihoods, housing stock, personal economic security, and education levels. Their environmental examination considered foci such as greenhouse gas inventories, reduction plans and goals, biodiversity, restoration of hydrologic flows, and agricultural yields. By analyzing social equity, students were able to explore the multiple services communities can provide, cultural resilience, gentrification, citizen empowerment, youth involvement and leadership, out-migration of youth, and vulnerable people. By the end of the semester, students gained critical knowledge regarding alternative responses to climate change by engaging in real-world policy analysis, while acquiring professional development skills and developing a resilient mindset.

Presentation of the Center for Spatial Business Student Excellence Awards

Presentation of the Tomlinson Prize for Excellence in GIS

Presentation of the Poster & StoryMap Awards

2022 Keynote: 7:15-8:15 PM, with introduction by Steven Moore, Director of the Center for Spatial Studies & Director of Sponsored Programs. 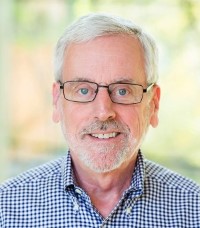 Maps are a universal language. Stories are as old as speech. Together they have the power to open minds to the world and its threatened wonders. Allen Carroll’s career has spanned the advent of the digital age, and is a kind of personal microcosm of the evolution of mapping from static to dynamic, and of the GIS community from back-office priesthood to global community of collaborators. He’ll tell a story or two about his years at National Geographic and Esri, and celebrate the burgeoning use of StoryMaps in the cause of education.

Allen Carroll is Program Manager for Storytelling at Esri. He founded Esri’s StoryMaps effort, which has enabled hundreds of thousands of individuals and organizations to tell place-based stories on the web combining interactive maps and multimedia content. He leads an Editorial team that publishes StoryMaps and supports a global community of storytellers. Allen came to Esri after 27 years at the National Geographic Society. In his latter years as the Society’s chief cartographer, he was deeply involved in the creation of the Society’s renowned reference and wall maps, globes, and atlases. He spearheaded the publication of many new maps and websites, ranging from large-format supplements to National Geographic magazine, to special projects featuring biodiversity and indigenous cultures.