On September 26, members of the University of Redlands community gathered to hear animal rights activist Jenny Brown speak on her path to veganism. Brown is the author of The Lucky Ones: My Passionate Fight For Farm Animals (Avery, 2012) and co-founder of Woodstock Farm Sanctuary in High Falls, New York, where she and her husband, along with their staff members, rescue and care for animals that have escaped industrial animal farming.

“Jenny Brown has built Woodstock Farm into one of the country’s most recognized and respected animal sanctuaries,” said Kathie Jenni, philosophy professor and the director of Human-Animal Studies at the University of Redlands. “She’s a true animal rights advocate.”

Brown began her presentation with a personal history, which involved a cancer diagnosis at 10-years-old and her close relationship with her cat, Boogie, fostered over the months she was home from school due to her illness. After rolling up her pant leg to display a prosthetic right calf as a result of a cancerous bone tumor, Brown recalled, “When I got to college, I found out about animals who had been used for experimentation in the pharmaceutical industry. It was then that I realized all the chemotherapy that I had gone through as a child that saved my life had been tested on animals first. Those animals had to suffer in order for my life to be saved.” 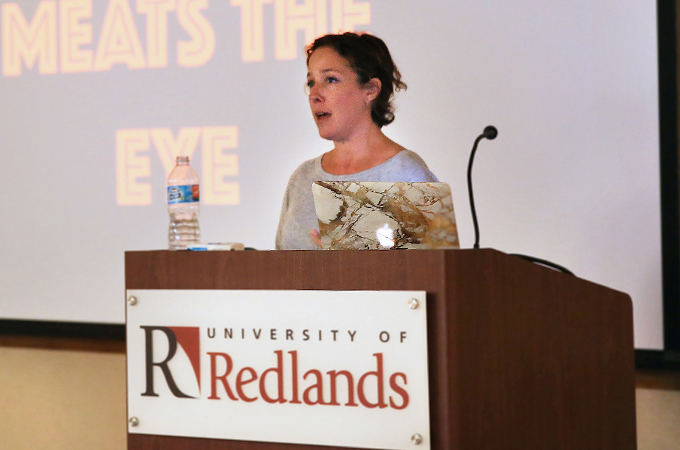 After becoming a vegetarian at 18, Brown went to film school and got involved with People for the Ethical Treatment of Animals (PETA). “One of my first undercover film jobs consisted of me being flown to North Dakota and breaking into a barn to get some of the first-ever footage of a Premarin facility,” Brown said. “Premarin is a drug that millions of women take during menopause, and it comes from the urine of pregnant horses. These horses are impregnated and forced to stand in tight stalls in order for their urine to be collected for this drug.”

After witnessing so many instances of animal abuse during her film career and learning about the environmental devastation caused by the meat and dairy industries, Brown committed to eating a vegan diet. In 2004, Brown and her husband founded the Woodstock Farm Sanctuary with a mission to rescue abused, abandoned, and neglected animals. “These animals behave very differently when they’re in an environment where they’re loved and treated with kindness,” said Brown. “Where they have names and not numbers.”

In between displaying pictures of the cows, goats, pigs, and other animals that live at the sanctuary, Brown revealed the awful reality that many animals face within the meat and dairy industries that includes castration, separation, and an average lifespan of only two years at most. In order to unveil the double standard that exists between caring for domestic pets while eating animal products for dinner, Brown touched on four points:

Ending her talk with a description of online resources and a list of meat and dairy alternatives available at grocery stores, Brown posed a question to the audience: “If we can live a happy and healthy life without bringing harm to others, why wouldn’t we?"

“If we can live a happy and healthy life without bringing harm to others, why wouldn’t we?"