Professor Nephelie Andonyadis' most recent set designs are hitting stages all over the country. 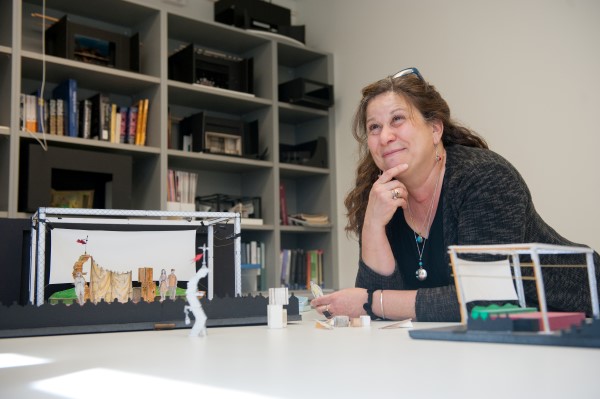 Recently, Theatre Arts Department Professor Nephelie Andonyadis has brought her design skills to productions the length and breadth of the state and throughout the US.

Two of these projects were regional theatre productions—Mr. Wolf (by Rajiv Josef) at South Coast Repertory in Costa Mesa and Disgraced (by Ayad Akhtar) at Playmakers Repertory Theatre in Chapel Hill, NC.

Andonyadis was also the set designer for two touring productions, Wrestling Jerusalem (by Aaron Davidman) and California the Tempest (by Alison Carey), which The Cornerstone Theater Company staged at 10 venues in California.

For Andonyadis a set design can be many things, from a colorful painted backdrop that fits into a suitcase (Wrestling Jerusalem), to a truss, platforms, stairs and “a huge number of props” that travels to different venues in several large trucks (California the Tempest). What matters, says Andonyadis, is that through her scenic design she is “creating an opportunity for words to be spoken in a meaningful way” and providing “the playground, the vessel the antagonist, the physical and visual space in which action happens.”

Small scale models, complete with tiny furniture and tiny people, help solidify the ideas. Then comes discussion, revision, more discussion and a final design, though even that can evolve and change during rehearsals.

In terms of bringing it back to the classroom, Andonayadis sees set design as instructive in much larger ways about “problem solving and collaboration and visioning.” Working with the seamstresses, carpenters and myriad other workers on a stage set is a skill to be learned, too.

“You have to be able to inform and inspire the team so they can invest themselves," she says.

"You have to be able to inform and inspire the team so they can invest themselves."—Nephelie Andonyadis