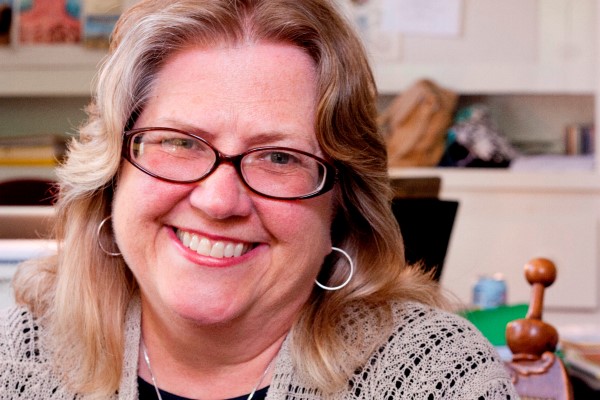 Keys feature prominently on the ceremonial Provost’s medallion that President Ralph Kuncl placed around Kathy Ogren’s neck at her official installation on December 2. According to Ogren, who has done her research, they represent the Provost’s role in unlocking doors to educational pathways.

Ogren, who served as dean of the College of Arts and Sciences from 2011 to 2015, was also a faculty member in the history department for many years and served as director of the Johnston Center for Integrative Studies from 1999-2007. Her new role as provost began this past June.

Long fascinated with the social significance of vernacular cultural forms—in particular jazz, blues, and cowboy poetry and music—Ogren has offered courses in American and African American history, women’s history, jazz and blues studies, and the modern American West, often combining history, literature and music in her classes. In her spare time Ogren performs as a vocalist with the Buffalo Blues Band, which she started in 2006 as part of a Johnston Center class project.

At the December 2 installation, several speakers set the stage for the evening’s main event, sharing anecdotes and memories of a born leader who has always worn her intellect and wisdom lightly and led by example.

“Kathy Ogren in college was the person that you know today—bright and lively, hardworking and hardplaying, serious but with a ready smile, engaging, kind, tough when necessary,” said Helen Horowitz, the Sydenham Clark Parson Professor Emerita of History at Smith College. Horowitz, an important mentor for Ogren, taught her as an undergraduate student at Scripps College, and directed her prize-winning honors thesis.

Horowitz noted how in preparation for giving her speech she had turned to her computer for some inspiration. “And there I found it on an unlikely site. YouTube. What I saw was a terrific performance of the Buffalo Blues Band. And best of all, at the end there was Kathy Ogren swaying and singing. The lyrics had her repeating: ‘I feel lucky!’ I hope she is feeling lucky at this ceremony right now. But perhaps the more important group to be singing these words is you—the Redlands community. For yes, with Kathy Ogren as Provost, you are very lucky!”

Bill McDonald, professor emeritus of English at the University of Redlands’ Johnston Center for Integrative Studies, spoke of how on her arrival at the University, in addition to her intellectual credentials, “she had plenty of streetwise experience as a socialist organizer, political activist and a feminist.” From the beginning, he said, she was “a hit” with her students, and with her colleagues, noting how her use of music in scholarship so inspired fellow history professor Jim Sandos that he started singing the marching song of Pancho Villa’s forces (“La Cucuracha”) in his Latin American Civilizations class.

Ogren’s leadership qualities were already in evidence during her years as director of the Johnston Center, said McDonald. “She nearly always had the best mediating idea, and just as important exactly the right tone, to express a solution without belittling the value of the contenders.”

For her part, Ogren began her remarks by referring to the song lyric “Teach Your Children Well,” made popular by the ‘60s rock and roll band Crosby, Stills, Nash and Young. “It is a mantra of mine,” said Ogren, “a mantra that inspires my work as a teacher, scholar, a contributor to many living-learning communities and now, as a university administrator with this most curious of titles, a Provost.”

“You, who are on the road,” Ogren sang to a newly captivated audience, “must have a code that you can live by.” Though there is no single code to live by on the road to educational advancement, she noted, it is our teachers who empower us and “de-code” the “knowledge, skills, sensibilities and experiences valuable to our journeys.”

Thanking Helen Horowitz and Bill McDonald for their mentorship, Ogren went on to thank President Ralph Kuncl who “daily challenges me to focus on what is important, not simply what is most urgent.”

Ogren explained her role as provost as one of opening doors. Part of that role, she said, was to uphold the value of a liberal arts degree in the face of critics who “denigrate the liberal arts as irrelevant or a luxury.” The facts are on our side, said Ogren, pointing out that universities like ours are more likely to graduate low-income and first-generation college students and that a liberal arts education is positively correlated with students who succeed in science and engineering careers. The full value of these degrees though, said Ogren, lies in “the interdisciplinary and cross-disciplinary opportunities that are much in demand for an innovative and entrepreneurial workforce.”

As Provost, said Ogren, “I will ask this always: Have we challenged students to achieve their best work in what they do best and in what is least comfortable for them? Have they studied their passions and what comes easily and pushed themselves to try something entirely new, whimsical even?”

Worrying “productively” when we reach challenging crossroads as a community is also part of the Provost’s role, said Ogren, referencing the recent and ongoing discussions around diversity and inclusion on campus.

“As Provost,” she said, “I am called to sit with all of us as we ‘worry’ over all the things worth knowing and doing to move this University forward. We will work—intellectually, culturally and emotionally as individual teachers and learners, and in community – to take that best right path together.”