‘Failure is the first attempt at learning’ says Johnston student May 26, 2020

Sabrina James ’21 always had a knack for adapting to new circumstances. So, when she found herself at the University of Redlands international campus in Salzburg, Austria in the early days of the COVID-19 pandemic, she knew she’d be able to find her way home.

James’s semester in Salzburg ended abruptly when a travel ban was imposed on trips to and from Europe. She and her roommate were faced with the chaos of dwindling flight availability, changing costs, and difficulty connecting with loved ones by phone. But instead of being consumed with panic, James and her classmates booked the first flight that they could find and afford and made it home.

“Coming home in a crisis reaffirmed, for me, that it is truly possible to figure out anything when you put your mind to it,” she says. “Our plans to get home failed many times, but I learned a lot about myself and the people I was with—we worked through it.”

James returned home to Oceanside, California—the place where she grew up and where her passion for education was ignited. As a Johnston Center for Integrative Studies student, James is pursuing an emphasis titled, “Understanding Social Inequity to Pursue Equity,” the foundation of which was laid years before she reached the Redlands campus.

As a teenager, James was classified as a McKinney-Vento youth, a child who lacked a fixed and regular residence. Throughout high school, she lived at a variety of friends’ homes until her 7th-grade math teacher offered James a room in her house, which is where she would stay until she moved to Redlands.

In addition to this experience, James participated in what she calls an “educational adventure” as a student at Vista High School. The adventure undertaken by a group of students and teachers was to reimagine the high school experience, a question posed by the XQ Super School Program.

“At the time, school felt very linear, and there wasn’t a lot of opportunity for students to succeed outside of the rigid structure,” she says. “We ended up throwing out the textbooks and redesigning the curriculum to meet our needs and fulfill our interests. It was a strengths-based educational pilot program, that pushed against deficit minded education.  “

One of the pilot’s tenants focused heavily on strengthening community inside and outside the classroom. James’ crafted a community-minded internship pathway with her former middle school, where she shadowed the principal, assisted with educational programming, and learned about the educational politics and operations in her school district. Early success with the pilot, she noted, came in the form of improved retention rates and grade point averages.

Having these transformative experiences with education encouraged James to pursue the subject in college, and, after discovering the Johnston Center, she knew she would be able to continue her untraditional but impactful experiential education at Redlands. When she received a Hunsaker Scholarship, a prize awarded annually to a select number of exceptional incoming students from diverse backgrounds, James committed to Redlands.

During her time on the Redlands campus, James has expanded her understanding of education into a more holistic view by taking courses in race and ethnic studies, sociology, and economics. Working as an office assistant in the College of Arts and Sciences Dean’s Office, she honed her skills in data collection and project management and plans to utilize what she’s learned in her future career.

However, the things she’s learned about herself over the past three years may prove to be the most valuable. “At Redlands, students are encouraged to foster their own communities,” she says. “Not only have I truly come to understand the value in that, but I’ve also learned how to view my shortcomings as first attempts in learning.” 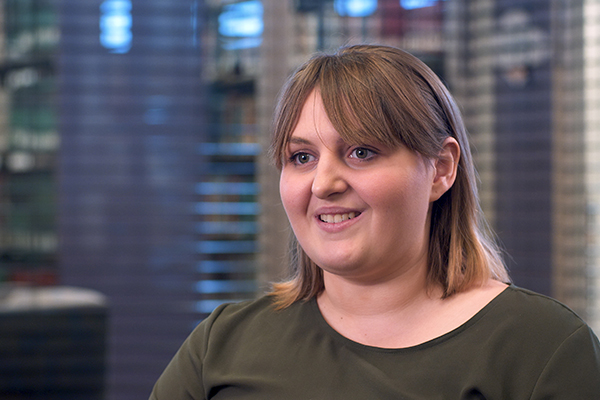 Learn more about the Johnston Center for Integrative Studies and study away at the University of Redlands.