When Montserrat Pineda ’22 was deciding which university she wanted to attend, she was struck by the personalized learning environment she witnessed at the University of Redlands. A few months after applying for admission, she was surprised when the admissions team sent her parents a version of her acceptance letter written in Spanish—their first language.

“As a first-generation student, college is a big deal,” she says. “That gesture really showed me that [the admissions team] cared.” 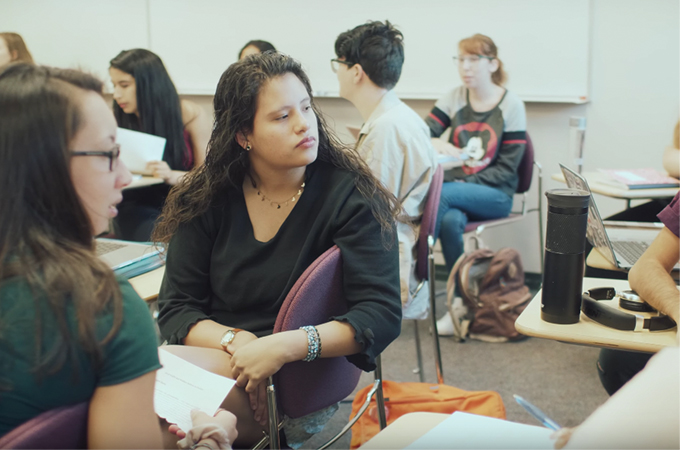 Attending Summer Bridge—a program that equips first-generation college students with important information before classes begin—gave Pineda a solid foundation of knowledge and a group of friends. "I met so many people I could relate to, and I'm still friends with a lot of them," she says.

During her first semester, Pineda enrolled in Finding Your Voice in America, a first-year seminar that focused on activism and public speaking. As one of the high school students who organized the Long Beach March for Our Lives event in the wake of the Marjory Stoneman Douglas High School shooting, Pineda quickly found her stride in the class.

At the end of the semester, Alesha Knox, the professor who taught the course, asked her to be a peer advisor to the next cohort of students. Pineda agreed and has spent the first half of her sophomore year holding office hours, helping students choose their classes, and contributing to class discussions.

Pineda says that her first-year seminar experience, paired with a course in health, medicine, and society, played a part in her decision to switch her major from biology to political science. She says, “For my whole life, I’ve wanted to be a doctor. But during my first year, I studied the intersections of decisions and how certain policies impact the public. I want to learn about the resources available to patients and be a source of information and support for them.”

Adopting a different approach to her career created new opportunities for internships as well. In an effort to gain real-world experience and serve her community, Pineda spent time last summer working for Mayor of Long Beach Robert Garcia and Congressman Alan Lowenthal.

Citing these experiences as some of the best of her life, Pineda spent her summer listening to and helping constituents—including people who live in the community she grew up in. She took the initiative to create an immigrant resource handout for those could be affected by an Immigration and Customs Enforcement (ICE) raid. The resource page was translated to Spanish, Khmer, and Vietnamese and is now available at Lowenthal’s office.

During the school year, Pineda works in the Study Away office, mentors students as a member of Students Together Empowering Peers (STEP), attends meetings for various clubs and organizations, reviews legislation as a member of the California College Democrats National Outreach Committee—all while keeping up with her coursework.

This schedule wouldn’t be possible, she says, without the support of her professors, mentors, advisors, and peers. While Pineda has sought advice from a number of people on campus, Assistant Provost for Internationalization Steve Wuhs, Pineda’s STEP mentor, advisor, and professor, stands out.

“I took his class on Latin American politics and he really went out of his way to include students,” she says. “He taught the class in English and then would meet with a group of us outside of class on his own time to read articles and listen to podcasts in Spanish. That enabled me to talk to my parents about current events happening in El Salvador in their first language.”

Professors’ eagerness to engage in discussion with students outside of the classroom is something that Pineda wasn’t expecting to find at the U of R. The support she has received from faculty and administrators has allowed her to think more deeply about the career that she wants to pursue, as well as reassuring her that she belongs on the Redlands campus.

“What I’m earning isn’t only a degree but an opportunity to give back and lift my community,” she says. “That’s what I hope to do in the future—give back to the people who have made me who I am and have given so much to me.”

Learn more about the University of Redlands political science program, clubs and organizations, and global opportunities.