Following weeks of preparation and anticipation, on April 25 commencement weekend finally arrived, providing friends, family, and the University of Redlands community an opportunity to celebrate the past achievements and future impact of 1,462 graduating students. 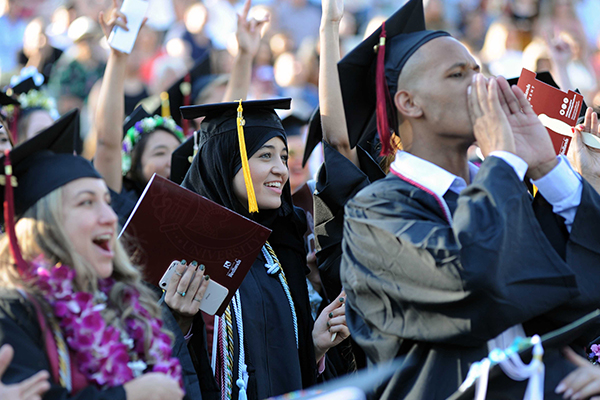 U of R President Ralph W. Kuncl was among those congratulating the graduates, emphasizing that their U of R education has helped them hone valuable skills, including the ability to communicate clearly, think critically, and solve complex problems. “Class of 2019, I am so honored to share this important moment in your lives,” he said.

On April 25, after dinner and award events, the School of Education was the first U of R school to hold its ceremony, graduating 379 students.

Student speaker Yolanda De Loera ’19, who received a doctorate in education, addressed her classmates, encouraging them to embrace opportunity and be the educational change of tomorrow.

“Remember that you began something the day you began formal education,” she said. “Just because you are graduating today doesn’t mean that it is over. No, it is just the beginning and I charge you, future education historical figures, teachers, counselors, administrators, and you, audience members and guests, to continue to steer your life paths towards a future [of] social change and social justice.”

The keynote address was delivered by Kevin Kumashiro, a former dean of education who is an expert on educational policy, school reform, teacher preparation, and educational equity and social justice. Continuing in that theme, Kumashiro urged graduates to question everything in their future careers.

‘Choosing for the right reasons’

The next day, 528 students from the College of Arts and Sciences (CAS) walked across the stage of the Greek Theatre to receive their diplomas, as an enthusiastic audience cheered them on.

Among the graduating students were the first 15 Richard and Virginia Hunsaker Scholarship prize recipients, whose majors/concentrations ranged from math and computer science to applied playwriting.

At the ceremony, student speaker Brenna Phillips ’19, who earned degrees in history and public policy, humorously equated college with a trip to the grocery store. “Today, we are all lining up to check out. … And then what. What will you do next? Well, here is the fun part; now we get to cook!! What items will you use right away… which ones will go to waste? Which ones will you put in the freezer with the hopes of coming back to them later in life?”

“The poem isn’t about making the right choice, but about choosing for the right reasons,” he said. “Since we may never know the outcome of many of our most important choices… we have to focus on using our critical thinking to choose. We weigh evidence that best promotes our moral values, and we pick a path. The method of choosing, not the choice itself, is what makes all the difference.”

While Johnston Center for Integrative Studies students participated in the College of Arts and Sciences ceremony, they also took part in a personalized event on Bekins Lawn for the 40 graduates.

Graduates of all schools were welcome at Friday morning's Baccalaureate proceedings.

‘We all have our own stories’

On April 27, the School of Business held the final 2019 University of Redlands commencement ceremony, awarding with bachelor’s or master’s degrees to 596 students from seven regional campuses throughout Southern California.

Danny Gaviria ’19 delivered the student address. Born and raised in Bogota, Colombia, Gaviria told his story, explaining that every student’s past has a hand in influencing every student’s future.

“We went through a lot to get where we are,” he said. “We all have our own stories, we all made sacrifices. During the program, most of us had to deal with a full-time job, friends, and family who begged for our attention. However, I am sure we can all agree, the biggest challenge was with ourselves and our minds telling us to quit every single day.”

The ceremony included a keynote speech by Paul Zak, an author, scientist, and professor of economics, psychology, and management. In his address, Zak illustrated how workplace trust and connection can foster a successful team; he also congratulated the graduates.

“You have acquired a huge set of skills in your education at the University of Redlands,” he said. “You have the power over what you do, where you do it, and how much you get paid. Use that power to create a career that’s going to be successful for you.”

Recordings are available for the School of Education, College of Arts and Sciences, and School of Business commencement proceedings. To learn more about courses of study at the University of Redlands, see www.redlands.edu.