Melodic and entrancing notes filled the University of Redlands Memorial Chapel last Wednesday, as an intimate gathering of students, faculty, alumni, and community members were treated to a piano performance by preeminent composer and musician Vijay Iyer. The impressive set included both Iyer’s take on jazz classics by the likes of Duke Ellington and Billy Strayhorn, as well as a number of Iyer’s original pieces.

The concert featured Iyer sitting at the piano, taking time between various pieces to give brief accounts of the context and history of the works he was interpreting. The intimate setting, simple presentation, and masterful playing combined to deliver a deeply emotionally impactful musical experience.

In addition to his noteworthy career as a touring musician, Iyer has an impressive list of accomplishments and accolades. A Grammy nominee, Iyer was named a fellow of the MacArthur Foundation in 2013, prior to taking a position as the Franklin D. and Florence Rosenblatt Professor for the Arts at the Harvard University Department of Music.

The artist himself, however, would likely brush past such accolades to discuss the impact and transformative potential of music in particular and art in general.

“The cliché about people like us [is] we're not artists; we're supposed to function in a way that is more toward the sciences,” he said at an open discussion with students and guests hosted by English Professor Priya Jha. “An Asian immigrant or child of immigrant allowed to express his or her own subjectivity was an underlying challenge I didn't even know I was stepping into.”

Iyer’s thoughts on race are also intertwined in his experience of jazz music. As he explained, the history of jazz and the framework of oppression suffered by African American artists who pioneered the genre are inseparable.

“I ask my students, ‘What do you mean by that, wanting to play jazz, what do you mean?’” he said. “[Jazz was] made by people in a historical context quite specific to American cities and to African American culture, which doesn't then rule out the fact that somebody else could be involved in it, but you have to figure out why—what do you want to really do here, what is your plan, what is your agenda, what is your goal?”

Iyer’s own contribution has taken the form of collaborating with musicians and artists of all stripes as well as allowing us to find the common humanity that we share in experiencing music together. Iyer’s contribution offers a guiding example of how music, and more broadly art, serves as a means of both exploring and expressing identity to experience more deeply what he refers to as “the radically unfinished project we call life.”

I was not the only one moved by Iyer’s visit. Here are some impressions from my classmates:

“I think all of the modesty he showed, contrasted with his piano playing, I’ve never seen anybody play a piano like that.” – Benjamin Gagliano ’18

“Something I was surprised about was his reaction about being received by us at the University of Redlands … he took a moment to express his appreciation for us and our knowledge about him. Even though he’s a successful musician he’s still really grounded and really humble.” – Ceci Yanez ’18

“Without the words in the music, seeing where he is coming from gives you a different level but also it had different meanings for every individual person.” – Catherine Weber ’18

“This idea of community … Here we are as a Redlands community, thinking, reflecting, and working on the same ideas together.” – Miles Johnson ’18

I had a chance to interview Iyer the day of his visit. You can watch the video below or on the U of R Facebook channel, where it was livestreamed. 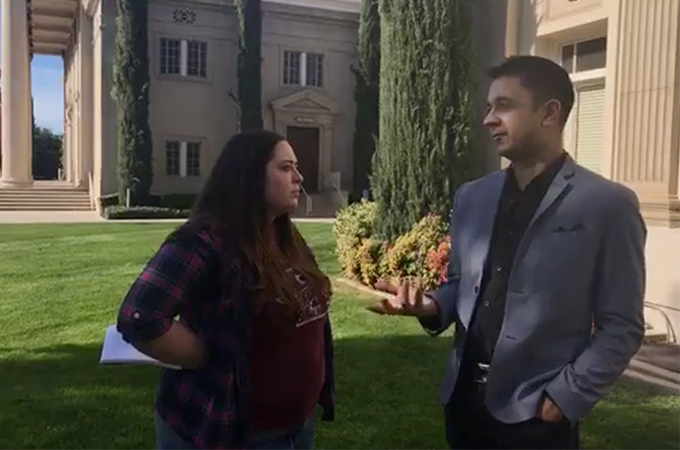 Learn more about the music program at the University of Redlands.