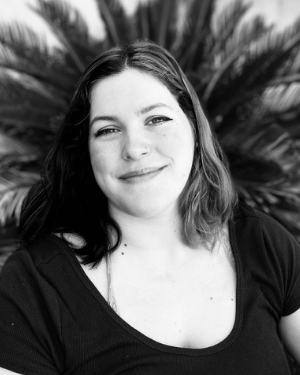 Nearing the end of 2020, I set out on a mission to create art that is painfully honest. I strove to leave a piece of me behind in every painting I made. In this series of work, I wanted to create a window into the everyday life of a 20-year-old art student working a taxing retail job, living at home with her parents, and struggling to keep herself sane, all while living through a pandemic. In an era where time does not seem real and moments fly past, I set out to eternize this period of my life through my work. These paintings have served as my diary for these last few months and I am very honored to be able to share this part of my life with you.

This piece was the result of a very emotional and stressful week. I found myself carrying this anger and frustration in my daily life and decided to release that into a painting. During this week, I remember being harassed by two different men while at work, one shook me so deeply that I became afraid to walk out to my car after my closing shift. It just so happened that the events happened just a couple days apart and stuck with me throughout the week. It kind of became the theme of this whole painting. Thankfully, no one touched me physically, but I had felt this tangibly gross feeling after being objectified and sexualized by these strange men. When thinking about this feeling, I kept thinking about hands and fingers and this distinct feeling of phantom touch. I want to use my art not only to share my experiences and feelings, but also advocate for myself and for people like myself. This is not an odd occurrence, especially for those working in the service industry. I want to use this piece and the experiences that sparked it to highlight the culture we have built.

As an artist struggling to find inspiration in a time in which leaving the house is a luxury, I decided to turn my focus inward. I sought out to use this time as an opportunity for

self-reflection and discovery and found the best way for me to work towards these goals is to analyze my thoughts and emotions and mold them into a visual language. Each of the paintings I have created over the last couple months have been worked over for a week. Every day, I added an entry to reflect something I experienced that day, encapsulating my lived experiences and any emotions I may have felt throughout the week into the painting. Through this, I hoped to eternize this strange time in history, where everyday has felt, to me at least, the same as the last and time has started to meld together. I wanted to document this time in my life for me to be able to look back on.

I’m primarily a painter and I work mainly with acrylic paint, though I do have an interest in a multitude of mediums. I decided to take this project as an opportunity to explore mediums that I work with less often, while continuing to refine my skills in my favorite medium. In this series, I’ve worked with anything from collage, to paint pens, to gouache, to charcoal. I tried not to limit myself in the mode in which I worked and instead tried to find the medium which most accurately reflected the feeling of the idea I was attempting to portray.

I’ve employed a multitude of methods of working, but for this series, I really wanted to work in an intuitive manner. I didn’t want to think too much about what I was going to create until I was sitting in front of the canvas. My intent was to be as truthful and vulnerable as possible, without second guessing myself. I've been working on allowing my thoughts to come out of my fingers, without filtration. This has been a new way of working for me and so far I’ve really enjoyed it. I hope you enjoy it as well.